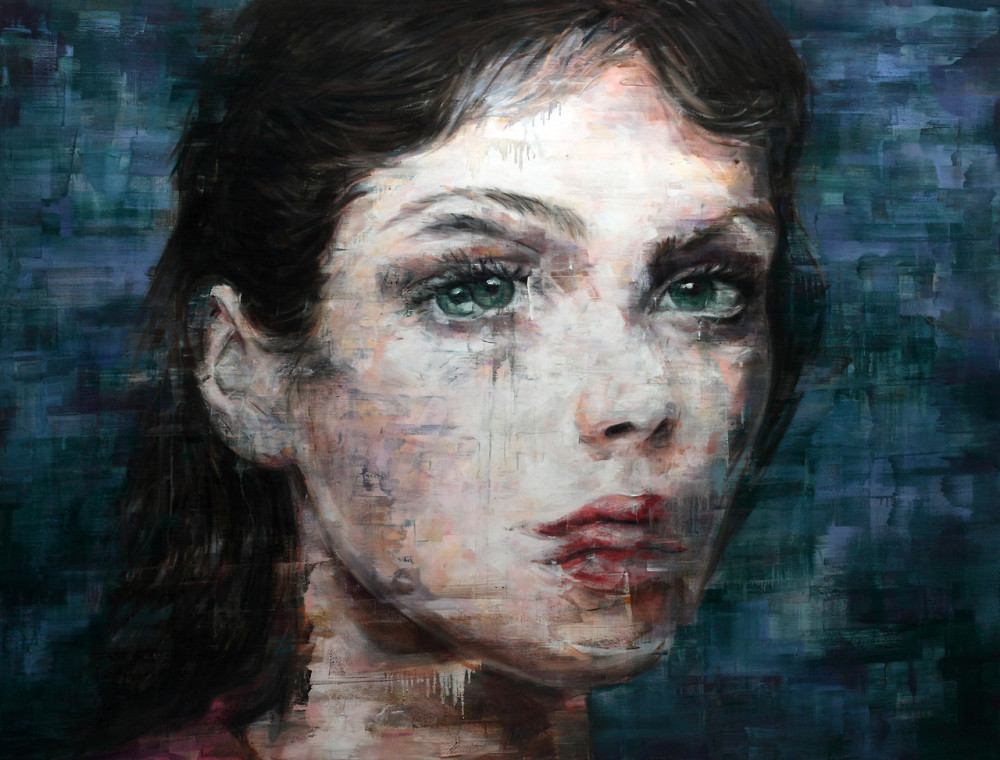 Portrait, February 2014, Oil on Canvas by Harding Meyer © 2014. Harding Meyer's current exhibition focuses on the face. His images come from the anonymity of media portraits which he transforms from plastic mass produced faces to intimate, mesmeric portraits. His technique plays with the glitchiness of computerised faces - pixilated, pigmented - which he makes human again, in arresting expressions. You can find out more about his work here.

u komesanju valova i bonaci, nosi

Controlled by the sea

she waits inside its tide

in turbulence and calm, wears

Cerulean or Paynes or Veridien

to match its mood. Her toes

dig deep to keep her static

push of waves; she stays

her eyes on the furthest point,

how far she’d get if she swam,

imagines a spot her limbs collapse,

the sea lugging her in

and down, down in murk

where she can breathe freely

Elizabeth Rose Murray (represented by Sallyanne Sweeney of Mulcahy Associates) lives in West Cork where she fishes, grows her own vegetables and lives for adventure and words. She has been shortlisted in the following competitions: Francis MacManus 2013 (Short Story), Penguin/RTE Guide 2013 (short story), Powers/Irish Times 2013 (flash fiction), Writing.ie/Anam cara 2013 & 2012 (flash fiction), Writers & Artists/Anam Cara 2013 (flash fiction) and Aesthetica Creative Works 2011 (poetry). You can chat to her via her blog here on Facebook or twitter: @ERMurray

Jasminka Griffin is a writer and translator originally from Croatia who has spent the past decade living in Dublin, Ireland, but who has never lost sight of her hometown of Rijeka. She is a Human Resources professional in love with writing and history. You can explore her blog or follow her on twitter @jasminkagriffin