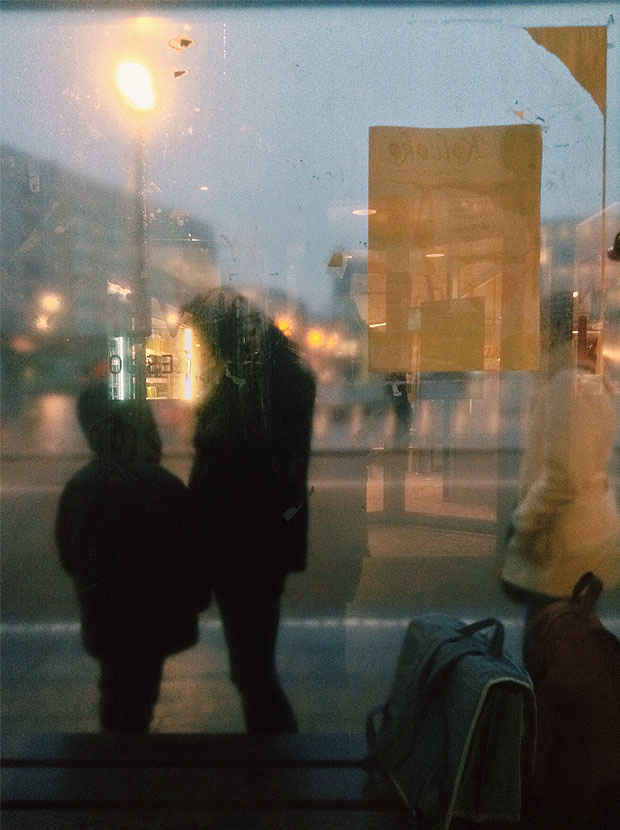 Mother figure by Julien Tatham © 2015. Julien Tatham is a photographer, film director and visual artist. Themes of wandering, otherness, of intimate moments in a landscape of anonymity punctuate his work - ideas which are tangible in his series of photographs taken at bus stops, 'Us Stop.' You can read more about him on his website, follow him on Twitter, Facebook and Instagram.

Living – living takes you away from sitting (Louise Gluck Twilight)

I need to be going somewhere

to break out of antipathy, to resist.

So we pack the car, lock up our house

stop to buy tomorrow’s breakfast on the way.

Before we eat together, we fill the room

with the clatter of pans, recalibrate

to the tumbling play of six cousins.

There are my sister’s girls, my brother’s boy.

We three feel it, how January

became this heavy month of leaving

Later we sit in the conservatory talking

over pots of tea Whose round is it?

Snow falls on the woods opposite

and I see we have become a snow globe

Maureen Curran lives in Donegal where she is a teacher. Her poems have appeared in Boyne Berries, Burning Bush 2, Crannóg, Envoi, Poetry Bus, Revival, The Stony Thursday Book, Skylight 47, online at Lake Poetry, Southword and Word Bohemia. She blogs with her group here.