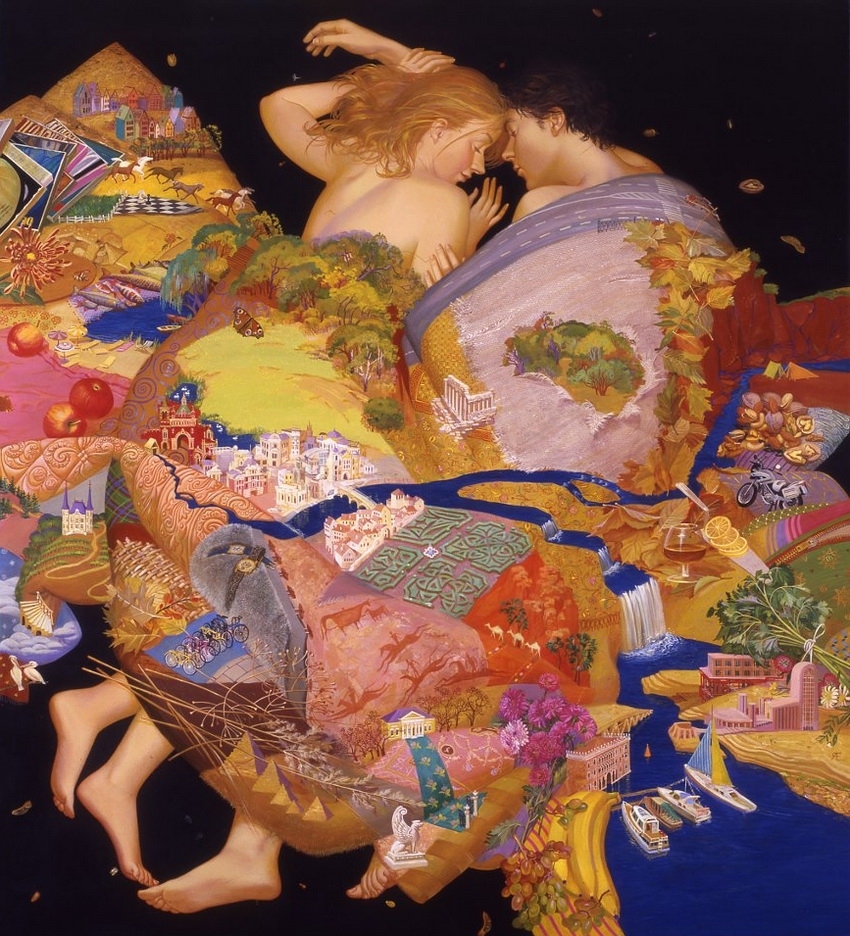 All will be well by Ekaterina Yestebrova © 2014. Ekaterina's work is a mixture of the surreal and sublime, and is both playful and provocative. Since 1990 she has exhibited her work in her native Russia and internationally. Her paintings are in private collections in Russia, Germany, The U.S A, Italy, France, The Czech Republic and Switzerland. You can find out more about her, and view her work here

Maybe the woman would bristle her shoes against the mat before calling out to the man. He would reply that he was in the kitchen and had cooked.

Maybe she would be delighted by the sun-blushed tomatoes; they’d looked so full of flavour when he’d plucked them from the vine. The spinach, he’d left well alone. Well, that would just go to show how he no longer doubted her strength.

If she wished for them, there were potatoes roasting in the oven. They would be last to the table.

Her half of the driveway still lay exposed. The sky – the dirty old dishcloth – hung, poised to wring itself out over their home.

The skin on the fish shimmered as he held it by the tail, that low centre of gravity making it a scuffle. He scraped scales off, sawed the head along a slightly angling gill: the decapitating slice-guide for beginners, he thought to himself. The man plunged the fish, filleted for two, into the slicked skillet. He waited.

Thunder made the neighbour’s dog cry and the man’s insides cling to his spine. He needed a harmonious riff to distract him from his thoughts. He took his phone from his pocket, pinned it on the speakers. Dinner needed checked. Plates needed warmed. The man opted for a random shuffle of songs.

Everything else, bar the music, had been thought through: the thyme he’d tugged from the window-box, the sunflowers shying away from each other in the vase, the pinot grigio sweating in the ice bucket. All the things the woman had claimed were her favourites.

The electronic intro of a dance tune took the man from his prep. He flicked past that song and subsequent ones. They were all essentially the same, all in that too frenetic beat.

He wiped his hands, lifted the phone and thumbed his way to a new shuffle. It started well. It was a good sign. Whether it was luck, intuition or some clever engineering, he could always tell from early on exactly how a playlist would play out.

He set the table, perched two hungry wine glasses beside their settings. The woman should have been home at any moment. Recently, however, she divided her time between quietly reproachful and clouding the air with innate prattle. The man imagined her face well-reddened from the elements; the pull of the wind dragging her from the moveable comfort of her car to their weather-beaten front door.

He detached fish flesh with a fork-side. It yielded. Separated. While outside the black keys of thunder played out a second verse, and lightning scorched the atmosphere.

Many songs had played now; most were theirs. First date. First dance. Second go of things. The woman could just as easily have chosen the same songs she’d missed.

The man emptied his glass into an empty gut. She should have been home an hour before. He should probably go ahead and eat. The potatoes were remembered from the oven more charred than crisped. Gravy would hide the damage done. The kettle plumped.

The woman could’ve been asked to work late. It was possible. He silenced the music from his phone to check his call list, texts and emails. Nothing.

On nights that were so stormy, gales could have felled the trees. One could have tumbled in her path. He swam their dinners with gravy and sat alone.

The woman had heard from the other man. Another possibly. Maybe the other man had talked her around; managed to ferry the woman from his past to his present.

The woman was lying in a hotel bed, wearing nothing but the other man’s limbs; the man could just see it. Maybe if she hadn’t confessed after the first time it wouldn’t have come to be the truth.

Kelly Creighton edits The Incubator Journal. She was shortlisted for the Fish Short Story Prize and awarded 2nd place in the Abroad Writers’ Conference flash fiction contest. Lapwing Publications published her poetry book 'Three Primes'. She is published in The Stinging Fly, Cyphers and elsewhere. @KellyCreighton