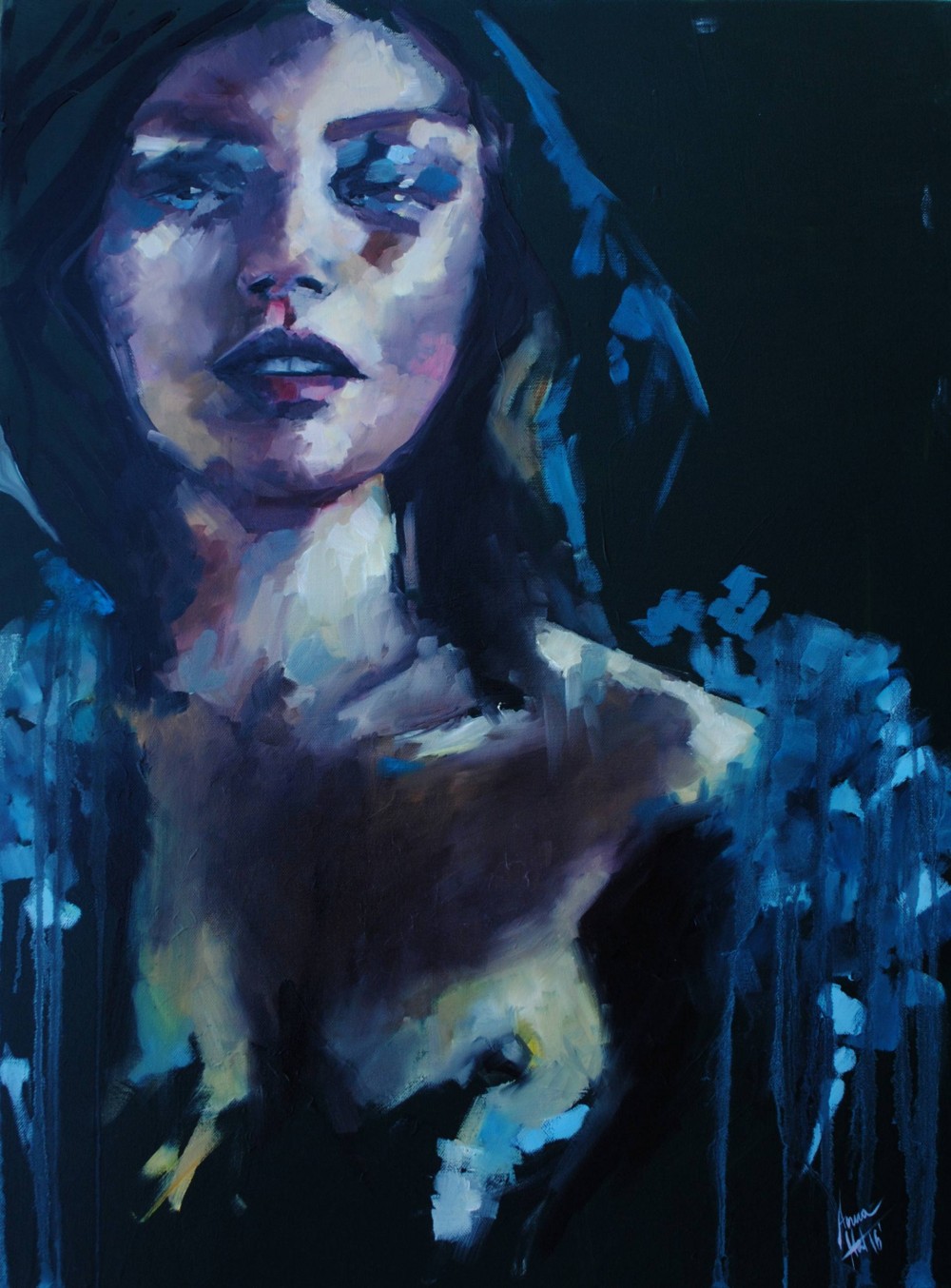 Verde by Anna Matykiewicz © 2016. Anna Matykiewicz is Polish born, living in Ireland. She works in watercolours, acrylic, oil and ink. She completed her B.A. in Visual Communication in 2005. You can follow her on Twitter, find her in the Saatchi gallery, and see more here.

The kitchen door creaked as he pushed it open. Mark thought of it as the house saying, “Welcome home, Mark. We’ve been waiting for you.” The floorboard just inside the door creaked too, a different creak, on a lower note. “Me too.” If you push the door almost to the point where it creaks, then slide your foot in, and put down your weight onto the creaky board just as you push the door all the way open so that they both creak at exactly the same moment they sound in harmony. It’s a perfect fourth in the key of F. It flares across your mind in a particular palette of greens, like the deep part of a shadowed rock pool.

Mark closed the door carefully and tried it. The two sounds came almost in unison, but not quite. Also, the floorboard isn’t quite F. It’s a tiny fraction sharp. F (quantum) sharp. He backed out and did it again. A perfect almost-fourth in F. So almost right that it was somehow more satisfying than the perfect interval. Mark hung his head and hummed the low note and then the high, rocking backwards and forwards on the creaky board with the door knob still in his hand. His shoulder-length hair hid him from the rest of the world, and he was lost in a cool jade-and-aqua space filled only with the base note of the floor and the intricate harmonies unwinding inside his skull.

A white light flared across the vision of sound behind his eyes and his shoulder slammed up against the door jamb. Mark’s head shot up and he reflexively straightened.

“F…sakes shut up that godawful noise,” came the slurred voice. Mark canted his head, avoiding his father’s eyes. He tried to sidle through the doorw, but the man was in the way. He wanted to go all the way through. It wasn’t any good standing on the creaky floorboard once the door was wide open. Then the sound was wrong, there were muddy-coloured spaces in it. He tried to move forward without touching his father. Again, he was stopped by the nearness of the figure in the doorway. He couldn’t go back. He’d already started to go in. Once you’ve started you’ve got to finish.

“I’m coming in,” he pleaded, hanging his head again.

The figure retreated, leaving just enough space for Mark to dart through into the kitchen, leaping over the creaky board to the safe one just beside the sink. His father squinted at him through bloodshot eyes and put out a heavy hand towards the boy’s head, halting a hairs-breadth short as Mark held his breath, willing himself not to flinch.

“Lunatic,” muttered his dad, not without affection, and walked back across the kitchenette towards the living area, where he flung himself down on the couch and picked up the TV remote.

“Make us a cuppa, lad,” he said, as he began to flick through channels. Mark filled the kettle to exactly enough for two mugs, then plugged it in and switched it on. He took two pieces of bread from the bag on the kitchen bench and put them in the toaster, set to ‘2’. They would need to go down twice before they were toasted just right, and he would turn them over after they popped up for the first time.

The kettle began burbling. Half-filling the kettle made A. Pale gold. The third note in the key of F. Mark hummed A quietly to himself, then hummed F. He looked longingly at the creaky floorboard, and his eyes darted across the room to where his father had settled on a tennis match and was leaning back in his seat, eyes half closed. Mark watched him until the eyelids fell and a faint snore could be heard (B natural, not in the key of F). Mark swithered, leaning towards the creaky board. As he made up his mind, and switched his weight to his right foot, the kettle reached the boil and turned itself off with a faint click. Too late.

Mark flipped the toast over and pushed it down again, then made up two mugs of tea, stirring exactly two spoonfuls of sugar into Dad’s mug. Dad likes one spoonful of sugar, heaped. That’s almost exactly the same as two spoonfuls, flat. It was okay, though: Dad was asleep, so Mark could do two spoonfuls, flat, scraping off the excess carefully with the back of a knife. Once he had tried to count the grains in a spoonful, heaped, so that he would know exactly how much to use every time, but Dad didn’t like that. “Don’t stick your fingers in it, boy. Just pour it in and stir.”

Dad likes everything to be normal. Not counting sugar grains, that’s normal. Just putting it in and stirring. Mark finished measuring two spoonfuls, flat, and poured the second one into the mug and stirred it straight away, making sure it was as normal as possible. Normal means the same as everybody else. But everybody’s different.

“I’m different,” whispered Mark as he scraped the last flakes of cheese across the pieces of toast and laid them carefully onto plates. He crossed the room and set one plate and one mug next to Dad on the coffee table. Then he sat down in the armchair on the other side of the room and ate his toast. He chewed every bite ten times before swallowing, and ate all the toast before drinking any tea. That meant he had to drink the tea in twenty sips. Ten times two is twenty, he thought to himself, leaning back in the chair. When he got to ten sips he stopped and checked his mug. Approximately half full. That’s okay. Approximately is normal. Suddenly Mark had a cheerful thought. He glanced across to check that Dad was still asleep, and then said it out loud:

“I’m normal. Everyone else is different.”