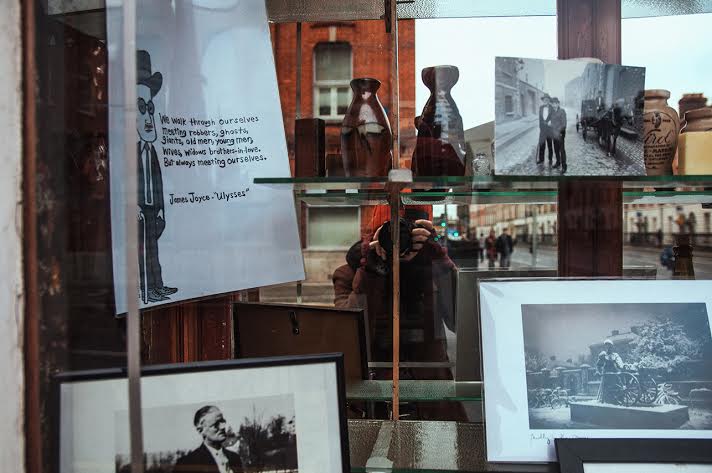 We walk through ourselves by Sanda Semelka © 2015. Sanda Semeika is a mother, musician and photographer originally from Latvia who has been living in Ireland for 10 years. She is currently working on a collection, 'Reflections' and 'Dreamscapes.' You can view more of her work on her Facebook page.

It is still unclear as to how Monsieur Lebeau came to hate the building at 33 rue de Nostalgie. It has crouched innocently at the edge of the harbour square for at least three hundred years, squatting there in the coastal sunlight with its timber sagging slowly towards the water: a simple structure, inoffensive to its neighbours, even betraying a little humble flair. Its reflection, though lost to most in the anonymity of the terrace, continues to shimmer over the waterscapes of Boudin and Monet. It’s only flaw, perhaps, was to embroil itself in a mortal feud with one of our townsfolk.

Accounts of this ‘Monsieur Lebeau’ (a lonely man, it seems) differ between Honfleur’s elderly Honfleurais: those well-informed, unwell and infirmed hunchbacks that sip cognac daily and whisper with the Old Dock. The monikers inscribed in place of his name (‘L’excentrique’; ‘Le Pianiste’; ‘Le Pauvre’) tell us little. We know that he was seen walking down the rue de Nostalgie once every morning and once every evening; that was the sum of his public life. The rest is obscured by vaguery and mist.

It seems M. Lebeau had first targeted the building as early as 1953. The house had been empty since the War and was only then re-opening as a bistro à la mode. Shortly after the ribbon-cutting, a young man ran grunting around the tables out front with a madeliene (our cake, of sorts) in his mouth and a rat’s-tail dangling over his chin. The bistro closed down within a week; Monsieur Lebeau’s bill remains unpaid. The house was bought by a photographer, who was chased out of town within a year after a salacious image appeared in his window overnight: a photomontage of Charles de Gaulle with the midriff of an ape, seemingly aroused. (The photographer tried without success to pass the buck onto some malicious assistant he had taken on in good faith, but his protests were lost under the din of the mob.)

A string of establishments fell victim to the 60s and 70s, collapsing under the weight of hygiene conspiracies, obscenity charges, public disturbances, relentless noise complaints, histories of Nazi collaborations, kinky rumours. By 1980, the house had earned itself the nickname ‘La Tombe de L’entrepeneur’. Its windows were boarded, its doors sealed shut.

It was around this time that Monsieur Lebeau first emerged on paper in our governmental offices. His calls for the demolition of 33 rue de Nostalgie were supported by wild and varied accusations: that the structure had lost its integrity, that it attracted squatters, that its upper mansard window was not in keeping with the architecture of the harbour, that the street was constantly littered by posters ripped from its boards, that Monet himself had expressed a dégoût esthétique (‘aesthetic disgust’) even whilst blurring it into his work. Petitions appeared on our town’s lampposts with Monsieur Lebeau’s signature (an anti-cursive march of lone letters) garrisoned friendlessly at the header. A paragraph even found its way into a Norman newspaper addressed openly to the citizens of Honfleur, printed, unfortunately, on the day of a national disaster. Lebeau, it seemed, was no match for bricks and mortar.

The final stroke came in 1995, when announcements were made that the building was to be sold at a drastically low price (the legend of the La Tombe still mid-haunt) to the firm of Celan and Szlangbaum, a Parisian outfit famed for their audacious cocktail nightclubs. Our youth were already chattering excitedly between humming scooters. The forgettable Honfleurais of the Old Dock turned from whisper to grumble. Estuaries of late-night cash opened before the town officials. But the sale was not to be. On 17 May 1995, the ground floor of 33 rue de Nostalgie sunk. Its facade slipped almost a metre forwards, leaving tiles and broken glass all over the street at the harbour corner. The area was ribboned with yellow tape; the house was condemned. Amongst the wreckage inside, flattened under splintered floorboard, they found Monsieur Lebeau, dressed in velvet and dust, cold as the Seine. There would be no plaque.

Removing the artefacts of the building’s front rooms was a delicate process, performed by experts. Aside from the tools Lebeau had used to remove a number of the foundation stones, they discovered a mattress, stove, bureau, typewriter, hat-stand, books on early twentieth-century composers (including of course, our own Erik Satie), a bouquet of antique umbrellas, photographs of the rue de Nostalgie and a collection of poems by Monsieur Lebeau himself. The poems remain in police custody; only the title of the anthology (‘Mémoires d’un memoriste’) has been released. How long he had been living there is impossible to say, but the implications of Best Before dates on recovered coffee cans suggest almost two decades. A shard of Monsieur Lebeau’s written work, stolen by a drunk who stumbled into the wreckage for a good night’s sleep, is perhaps more enlightening: ‘Here I walked with Boudin, where we discovered the Impressionist light’ – it was scratched into a brick.

We are happy to announce that the restoration of 33 rue de Nostalgie is now complete, though we can only speculate what the ghost of Monsieur Lebeau must think of the rucksacked tourists pausing there to snap happily the new cafe with its unusual mansard window. Its history moves from Monet to the new century, for new memories to be made and new reflections to find their way into the water: one house amongst Honfleur’s hundreds, innocent and inoffensive. The elderly glance in its direction, whisper of its secrets, speculate as to its spectres. The madeleines fly out of its doors, into the street, whilst crisp Euro bills are pulled inside. The cafe-owner is counting his money, content, and admiring the new sign which is now being hung outside. The mural, pointillist in style, depicts a man in coat-and-tails staring out at the harbour. Its title directs us to a victory infused with humility: La Tombe de Lebeau.

Visit, if you can. It is a wonderful cafe.

Joe Bedford is a writer living in Brighton, UK. His work has appeared or is forthcoming in Adbusters, Storgy and Spelk.