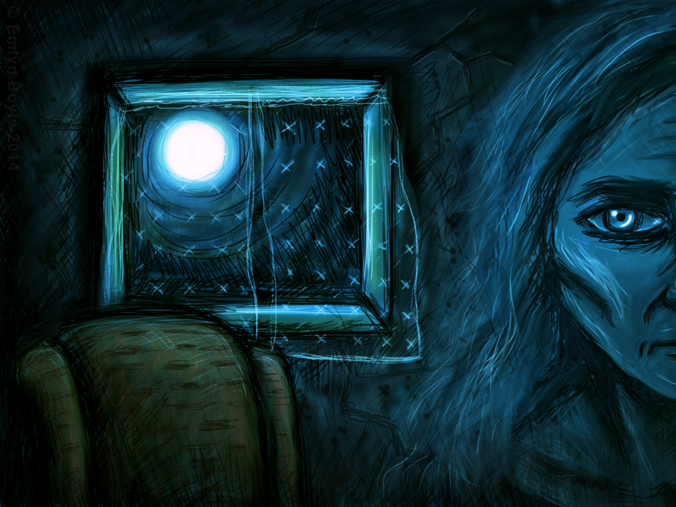 Hauntology by Emlyn Boyle © 2014. Emlyn Boyle is a multimedia artist, writer and photographer originally from Dublin. His animated short "Waiting" screened in competition as part of the Belfast Film Festival 2013. You can explore his work here

Eilidh read over the letter for the final time before she folded it in two and placed it inside the envelope that lay on her bed covers. The dry glue felt rough on her drier tongue. She’d never liked the taste of envelopes. Her mum had once hit her for spitting out the taste when she was young.

She picked up the foundation pen from her bedside table and with shaking hands wrote two names on the brown surface: Menzies and Millicent. Out of habit she blew the ink dry and kissed Menzies’ name. Dots of pink lipstick now surrounded her son’s name. The effect made her give a chuckle that turned into a cough. A mouthful of water helped to fend off the attack.

Her walls were covered in photos of happy memories and shapes of yellow light, refractions created by the water glass and her bedside light. Each photo was filled with happy memories: ice creams at the beach, holidays and trips. All contained the same smile from her boy. She noticed for the first time that she’d put them in age order. From left to right he grew older.

Her hand reached for the third object that lived on her bedside, a small bell that had followed her from house to house since her fifth birthday. Until recently it had been a welcome companion. Now it summed up her frailties. She rang it twice. The gentle ring echoed through the small house before being drowned out by the crash of a pair of boots on the wooden floor downstairs.

Menzies had his feet up on the sofa again. Eilidh knew she should tell him off but she didn’t have the energy or the desire to do so. The boots crashed up the stairs. Eilidh half expected a young boy to open the door to her bedroom. Instead it revealed a man in his twenties — Menzies, sporting an unshaven face with unkempt hair. She’d made the right choice all those years ago. For the final time, Eilidh smiled.

The mist seeped into Menzies’ clothing. Water dripped from his uncut hair and glasses. Not for the first time he wished he used the contact lenses that sat unopened at home. He gave a sniff of laughter. The small house didn’t feel like home any more. The last of her warmth was in her letter which he carried in his duffel coat pocket. Eilidh’s handwriting was already bad enough without water damage making the ink run and splodge.

Above him lamps hung from the black trees. The light they admitted fuzzed into the mist. They led him to a thick black stripe that ran across the horizon. The only gap bridged by a metal arch. Dark vines weaved between rusted letters.

Inside the wall a new shape dominated the landscape, a mansion whose only distinctive feature was its size. From almost the middle of the building, two dim circles glowed, like a pair of sad eyes. Menzies hoped the outside of the mansion wasn’t a metaphor for those inside. The mansion’s door completed the face. The slab of wood was the same shade as the stone work that surrounded it. The bronze knocker at least gave it some character.

Menzies reached for the heavy metal hoop. He hesitated and decided to knock. His fist fell hard, too hard, on the weathered wood. The sound echoed inside. He added a couple of short knocks to try and make his first attempt sound more natural. He was sure he failed.

The door slid open silently to reveal an old man in a dark suit. A hint of dust on his shoulders. Everything about him could be described as old, tall and thin, even the words that escaped his lips. “Hello?”

The old man looked down at him. His nose filled his face. Menzies wanted to take a step back but he knew if he did he’d never stop. He counted to ten as his mum had told him to do.

“I have a message for M…for Millicent.”

“Well.” The old man seemed to pause for longer than normal. “This way.”

Inside, the house was lit by the same lamps as outside. This time they hung on the walls rather than above. Their light created pools of yellow where the oak panelled walls met the black red carpet. Dark paintings of hunts interrupted the oak panelling, a scared fox the only splash of bright colour.

Only the first door they passed was open. Inside was a high back chair and an old fashioned music system. From the speakers Vivaldi’s Winter Concerto escaped and creeped after the pair as they turned into new corridors. Menzies quickly felt lost, each corridor looked the same. The final one they turned into had only one door.

The old man stopped in front of it and knocked twice. Both were polite as he wished to gain a person’s attention but not annoy them. Inside, the excited whispers of two female voices stopped as if turned off by a switch to be replaced by a single groan which lasted for only a moment.

“Come,” a female voice beckoned. The old man pushed the door open, ushered Menzies to go in before he turned and walked away. Menzies took a deep breath and stepped inside.

The room felt as large as the house itself. In the centre was a giant four poster bed, purple curtains tied to each post. The far wall was taken up by a fire place that stretched from one side of the room to the other. Above it was an equally big TV. The screen was filled with the image of a blonde haired young woman’s head and bare shoulders. Menzies wondered if this was the case for the rest of her body. Her lips were formed into the shape of a frozen kiss being blown at the viewer. The same face appeared from the bed, much less happy. Her blonde hair swept over her shoulders. She looked at Menzies, her face filled with challenge.

It softened when a hand appeared from behind her and was placed on her shoulder. The red nails were stark against the woman’s pale skin. The rest of the woman appeared from behind the younger one. She was twice as old but as beautiful. A silk gown decorated, rather than covered her body. Millicent, Menzies thought as he averted his eyes.

“Yes?” Millicent asked, the same voice that had told him to enter.

“I have a message for you.” Menzies was surprised his voice was so confident. “From Eilidh.”

Millicent turned to the blonde. “Go,” she instructed.

“Now.” She emphasised the syllable.

The blonde lifted herself off the bed and walked towards Menzies, answering his earlier thought in the process. When she reached him, she grabbed his face and pulled it towards her lips, kissing him hard. The surprise was replaced with the pleasure of her soft lips. She broke the kiss and shouted at Millicant, “gone.”

The door echoed as it slammed into its frame.

“She’ll be back.” Millicent stepped off the bed. “What was your message?”

Menzies had practised his response to this question over and over since he had first read the letter, yet the words turned into misshapen lumps in his mouth.

“Well?” So much contempt in a small word.

He swallowed before saying, “Eilidh died this morning.”

Millicent’s face didn’t react, instead she picked up a cigarette from the mantle piece behind her and lit it on the fire. After a single drag she said, “I’m sorry to hear that. I’d heard she was ill.”

Menzies clinched his fists in anger. His nails dug into his palm as he fought to keep his emotion there.

Menzies pulled the letter from his jacket pocket and threw it on the floor in front of her where it landed with a satisfying thump. Small brown water stains marked the edges. One side had been ripped open and now looked like a mountain range covered in a snow of torn paper.

“What does it say?” Millicent blew the toxins of her cigarette into the air between them.

“The truth.” Menzies cursed himself for saying something so corny. The word undermined the importance of the situation, of what he was about to say.

“That you are my mother.”

The cigarette dropped from Millicent’s fingers. It rested on the floor, the ash mixing with the carpet. Without looking, and with perfect precision, she flicked it into the fire behind with her foot. She pulled her gown around her body covering up the skin she had on show. She stepped forward and took the letter from Menzies’s outstretched hand.

“Now you know, Eilidh was always…” Millicent stopped as if her next words needed careful consideration to protect herself rather than him, “…more caring, the better mother.”

Anger slipped into his words. “I’m only doing what Eilidh — mum asked.”

The final word washed across the room to reveal the situation in its true form. The only reason why Menzies was here was gone. Millicent didn’t seem to want to provide another.

The door echoed for the second time that night. This time silence followed. Millicent sat down on the edge of the bed, her back to the door, the fire in front of her. She smiled at her schoolfriend’s handwriting, slanted lines and non-existent loops decorated the page. The words were equally distinctive, all kindness where none was due. For Menzies’ benefit Millicent hoped. When she had finished reading, she lifted the letter to her lips and kissed Eilidh’s signature.

She folded the letter back into the envelope and placed it into the fire, where the flames turned her old life into ash.

Stephen has been coming up with stories for as long as he can remember. Recently he has started writing them down and has been lucky enough to have been published in a number of magazines such as Far Off Places, [untitled] and The Puffin Review. In his spare time he works as a charity fundraiser and tweets from @The_Red_Fleece