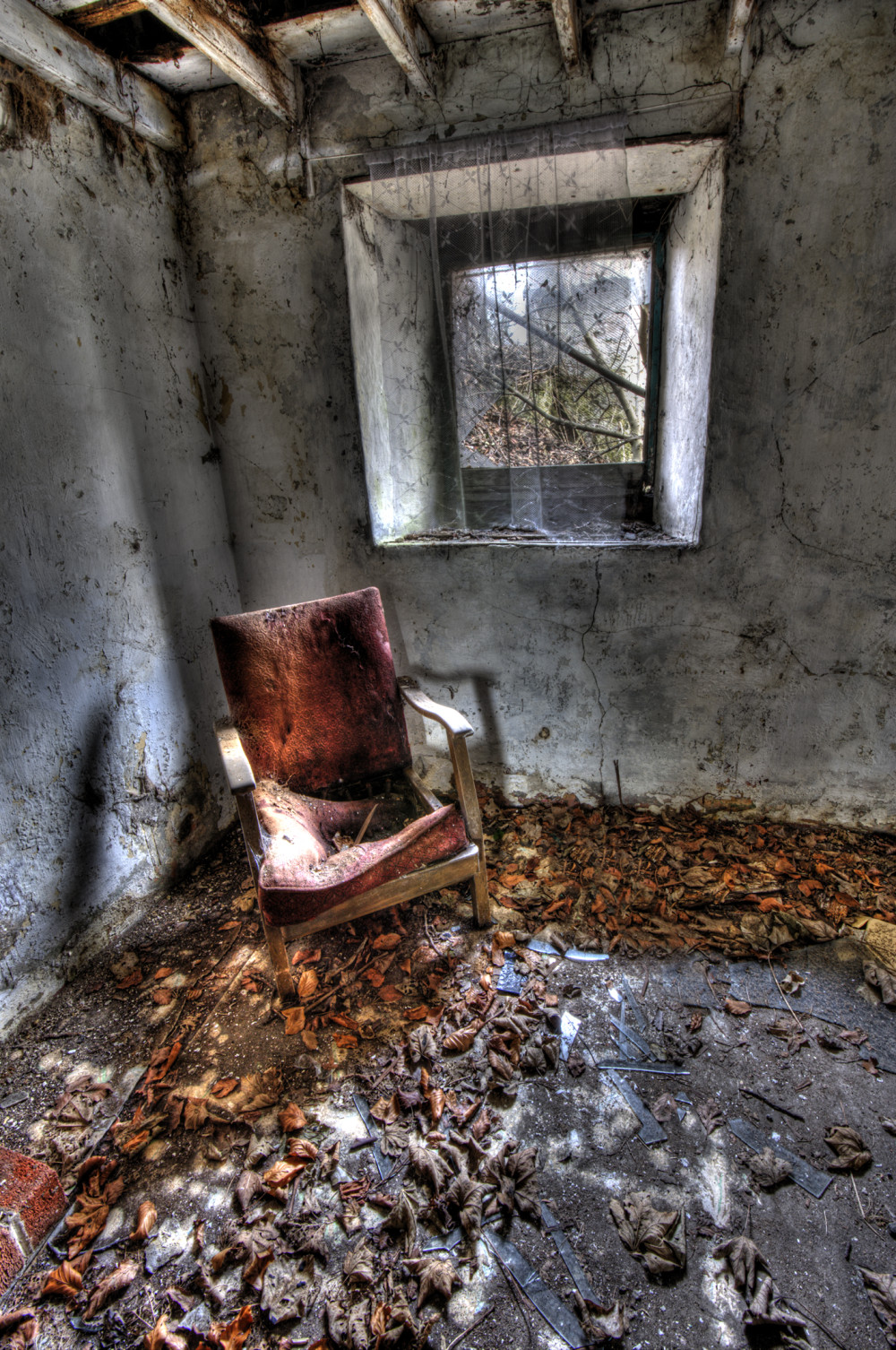 The Reading Chair by David Armstrong © 2013. David Armstrong grew up close to the spectacular Antrim coast in Northern Ireland, which inspired his interest in photography. His work is influenced by the beauty of the natural world and his surroundings but also by an appreciation of structure and form gleaned from a two decade architectural career in England and Ireland. You can explore his work at djaphotography.co.uk

“How brave a homely woman has to be!

How disciplined of her, not to set fire to the Museum of Art.”

Arthur Millar, After the Fall

She was not the kind of girl who could go without washing her hands. Given to chewing her fingernails and ill-inclined to sacrifice this small pleasure, she was careful to ensure they were at very least, clean. She waited for the sinks to come free, purposefully examining the floor around her feet. It was a trick she’d perfected in her teenage years, allowing her to avoid eye contact with the wall-mounted mirrors which haunted public bathrooms. When a space came free she slid into place, approaching the trough, arms outstretched like a nervous, first communicant. She tucked her purse under her armpit. It immediately slid free, patent leather incapable of resisting the smooth, fur of her winter coat. There was no safe place to balance her purse on the sink and so she clasped it awkwardly between her knees, hitching her skirts up to make room.

To her left a sun-blushed twig of a girl applied layer upon layer of rouge to a pair of already blushing, apple cheeks. To her right a similarly-sized twig was manipulating her fringe into a well-lacquered guillotine. The hair spray, emanating from the girl’s fingers was forming a chemical fog at the back of her throat, settling, she imagined, with gluey intent on her lashes, her eyebrows and each one of her nostril hairs. She coughed suddenly, an off-season sneeze of a cough, which surprised her with its velocity and, as it ricocheted, caused her companions to turn angrily and the purse to drop from beneath her knees, sliding across the bathroom floor like an unplanned pregnancy.

“Sorry,” she said, though she was not sure what she was apologizing for.

She was the kind of woman who almost always found it easier to apologize.

The twigs returned to their applications. She retrieved her purse and balanced it between pinched ankles. Shoving her coat sleeves to her elbows like a pair of reluctant concertinas she anointed her palms with a generous dollop of soap, which, when it finally glooped free of the dispenser, appeared to be the colour and consistency of children’s cough syrup. Reassured, she reached for the cold tap. It spun giddily in her hand. The streaming water approached the porcelain bowl at an ungodly clip and shattered on collision, baptising all three women in a fine, sappy mist.

“Sorry,” she said again, and spun the tap off. She noted with some small pleasure that the twig to her left was wearing brushed silk and would most likely watermark. She could not risk another advance upon the cold tap. The line for the sinks was waiting impatiently, for some reason focusing its itching frustration upon her whilst the younger girls continued to preen with self-indulgent disregard.

Her hands were still sticky with soap but fishing in her coat pockets she located a used Kleenex and balling it between her palms, did her best to remove the worst of the residue.

She raised her chin to consider her reflection. Bookended by beauty as slight and condensed as a boiled sweet she could not help but draw comparisons.

She regretted the coat with its mountainous shoulders and the red dress which cut bluntly so her legs looked like a pair of lamb shanks balancing on heels, also the necklace which had, three hours earlier seemed youthful, and yet now, twinkling in the strip lighting, felt like a second chin bobbling awkwardly about her throat.

A mumbling sort of despair rushed her lungs each time she looked in the mirror. She did her best to keep these lookings to a utilitarian minimum. Twice daily – morning and night – she considered her own face carefully, for reasons solely medical, and at all other times approached reflective surfaces with the glazed ambivalence of the excessively plain.

She was not an ugly woman.

Her face was merely blunt and, for the most part, forgettable. To be truly ugly, she believed, would have been greatly preferable, something to war against. As it was, her face was a disappointment she could do nothing about. Only her ears were redeemable, and this realization seemed cruel and pointless, for whoever heard of a nice man falling in love with a girl’s ears.

She patted her hair into place, open hand ascending and descending like a Papal blessing, for this seemed the thing to be done in public bathrooms. Adjusting her winter coat she found that the cuffs were slightly damp to the touch, a thin trickle of water having made a bolt for her elbow, dribbling down the inside of her sleeve. She sighed and turned to leave, catching a last clumsy look at her profile in the mirror.

“What’s so very special about me?” she wondered for she’d been raised religious with the concrete belief that all folks, even the simple ones, were special in their own peculiar way. The question had trailed behind her heels like a loose wad of toilet paper, unanswered and unraveling, for the better party of forty years.

All of a sudden with her back to the mirror and her face turned towards the Tampon dispenser she recalled her special thing. It was a sharp comfort comparable to the retrieval of a lost key or library book.

She could remember with searing exactitude the layout, the décor and colourings of every room she’d ever entered. Beginning with the hospital room in which she’d spent her first huffering moments – dozing, pink in a clear plastic cot by a sun-rushed window- and concluding with the thick velvet concert hall she’d ducked out of five minutes previous, she could recall hundreds and thousands of individually specific rooms. And this number was notwithstanding waiting rooms, offices, stationary closets and hotel rooms which were religiously uniform in their placement of beds, trouser presses and limited edition Van Gogh prints. Her parents’ bedroom sang to her. The kindergarten classroom in which she’d first learnt to curl her eights, rose in her nostrils, gingerbread and talcum powder warm. Her grandmother’s good room with its turf stacked hearth laughed long and rollicking loud inside her ribcage.

The march of sofas and scatter cushions, well-placed ornaments and oriental rugs paraded through her brain; an indivisible miracle all of her own.

Glancing backwards as she left the bathroom she caught a sideways slice of her reflection, beaming now, emboldened by the memory of all those rooms. Her hair, which was neither here nor there, was hooked behind her left ear, its unassuming pearl earring a bullet point pinning her insides together. She carried this image all the way down the darkly corridor and back to her seat.

The concert recommenced and the ear stayed with her, throbbing now, a dull reminder that nice men do not, as a rule, fall in love with ears or above average powers of recollection.

The seat seemed too shrivelling small to contain her.

She felt herself drowning in its plush, red fabric.

Jan Carson is a writer and community arts development officer currently based in Belfast, Northern Ireland. She has a BA in English Literature from Queen’s University Belfast and an MLitt. In Theology and Contemporary Culture from St. Andrew’s University, Scotland. She has previously lived and worked in Oregon, Colorado and London. Jan has had several short stories published in literary journals on both sides of the Atlantic and has recently read her work at the Irish Writers’ Centre in Dublin. She also has experience in screenplay writing and writing for radio and theatre. Her first novel, “Malcolm Orange Disappears” is due for publication in Spring 2014 with Liberties Press, Dublin.