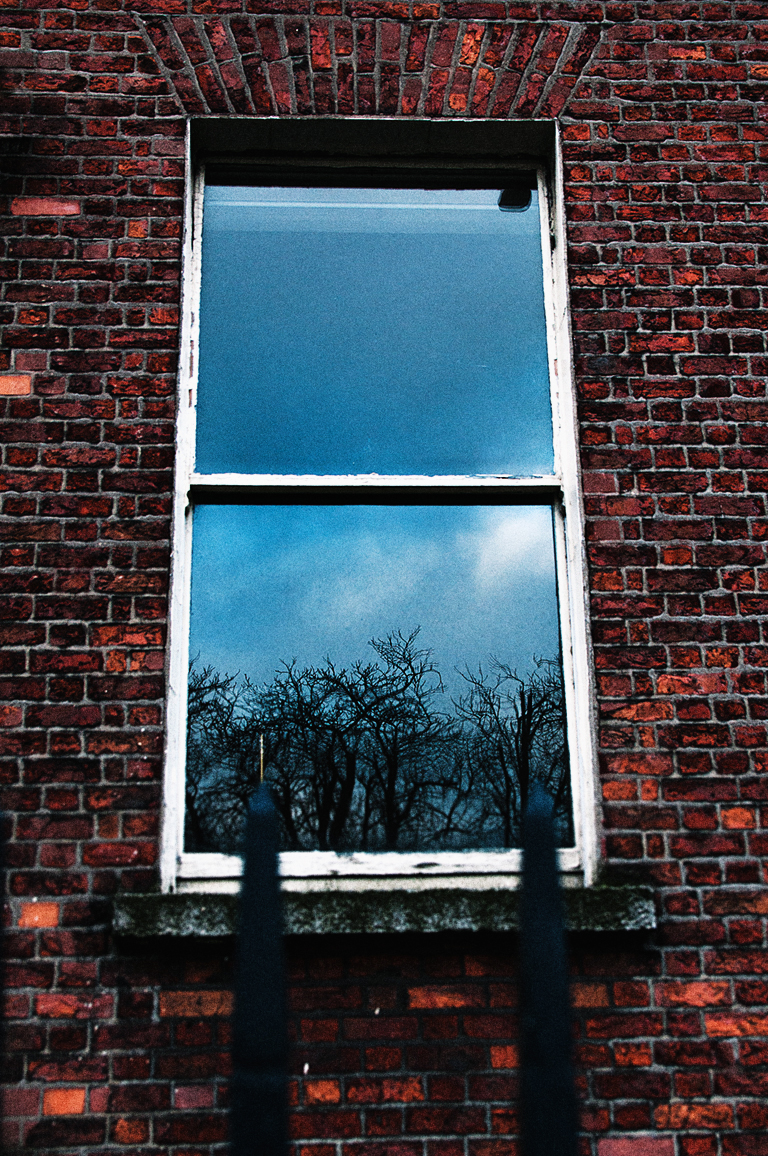 Introspection by Sanda Semeika © 2015. Sanda Semeika is a mother, musician and photographer originally from Latvia who has been living in Ireland for 10 years. She is currently working on a collection, 'Reflections' and 'Dreamscapes.' You can view more of her work on her Facebook page.

The hotel was covered in a green ivy that looked like it had nearly managed to suffocate the whole of its front wall. Liz tried to avoid the ivy that hung down over the front door but it still brushed off her. She adjusted her eyes to the lighting inside. She was still flicking the feel of the ivy away when she saw the reception desk towards the back of the hotel lobby. A young girl sat behind it, tapping at a keyboard. She did not look up at her guest and Liz should have read the situation better. This and the ivy had unnerved her but instead, on this day she decided to block those feelings out and she spoke to the girl.

“Hi. I booked a room last night. The name is Liz Cawley.”
“Right,” the girl replied, still not looking up.” Smoking or non-smoking?”
“Non,” Liz replied, thinking that every room was non-smoking now.
“Right. I suppose you want help with your case,” the girl said, her eyes never once deviating from the screen.
“No. I’ll manage,” Liz just wanted to get into her room, put up the “Do not disturb sign” and lie back on her bed. She needed some silence before tomorrow. The girl cocked her head and looked at Liz for the first time.
“I’ll give you the quietest room. It’s peaceful back there. Old part of the hotel with a nice view of the garden. It will lift your spirits,” she said.

Liz took the keys from the girl but barely heard the directions as she moved away from the reception. Her eyes had adjusted by now but the colour of the lights had stayed the same. It was letting off a buzzy warmth as if it was warning that it could cut out at any second. Liz had been feeling headachey all morning and spots of light were forming across her vision. She needed to get into her room and escape the light. It was right at the back of the hotel as the girl had said and she admired the key as she located the keyhole. It was a clunky, bronze key with a huge label and the room number 369 stamped boldly on it.

She pushed the door in and lugged her case through, then shut and locked it quickly, leaving the key swinging back and forth in rhythm. She did not turn on the light, instead, she went to the curtains and pulled them right back hoping to let more of the natural light flow in to ease her aches. Only dullness from outside came through the window and she looked out onto the view that the girl had promised would boost her. There must have been at least seven acres of land surrounding the hotel. A moss covered dead fountain was plonked in the middle of the grounds;paths of stones and weeds crawling up to meet it. There was no pattern to the growth of the plants and no evidence of the landscaping features that had been mentioned when Liz had looked up the hotel online the night before.

That’s what you deserve really, she thought. She had booked this night away as a treat or a reward of some sort but now she felt like the chaos of the outside was ticking her off. It was as if it were criticising her for what she had planned to do the next day.

She decided to close the curtains tight to keep the view away and she turned on the lights. dimming them to a tolerable level. The buzz started up at once. I can put up with that, I guess, she thought. I’ll just have to, I’m not booking out now, it’ll be too much hassle and this place is so near the clinic.

She opened her case and took out her cosmetics bag. She had packed a couple of pregnancy tests even though she would only need one. Her daily viewing of the blue line on the pregnancy stick had became a preoccupation to her, the routine didn’t allow her to ignore her issue. If she forgot even for a while, it might be too late to go through with it. She was afraid that she would give in and connect with what was there inside of her. What will I do after the procedure, when the lines disappear and become a white circle, she thought. I’ll just have to move on and say nothing. But, there it was, that line, stronger than ever today, definite and proud. The blue line cut through the oval display, making it into two halves. She sat for a moment at the edge of the bath, considering it and then disposed of the stick in a plastic bag, pushing it under her clothes in her case. She had first done a pregnancy test in a train station, the image it had released shocked her and she had tried to hide it in the already packed sanitary bin. It hadn’t really fitted so she had left it there on top for all to see. That memory had infected her mind. She had thought of it abandoned in a mouldy toilet in a train station. So, she had taken to saving them, minding them even.

Pulling her clothes off, she crawled under the bed covers naked. At least the hotel is warm, she thought and she slept. It was dark when her phone woke her up. Fumbling for it, she saw it was her mother so she hit the reject button. Let her leave a message. She’ll only be wondering where I am, she’ll know I’m lying, she’ll ask questions.The lights had turned off while she had slept. The threat of her headache was still there though. I’ve got to eat, she thought, putting her clothes on that had been shed onto the floor. The lights in the hall ramped the thuds in her head right up and she took the lift down to ground floor for relief.

The young girl was still on reception and she looked up, smiled and carried on with her screen work. Liz followed the signs to the bar and took a seat away from people, at the window, looking onto the back of the hotel again.
“Well, how are we? What would the lady like today? Specials are fish pie and chicken casserole. The fish is particularly good,” the waitress said. She was a large woman, sucked into a tight black dress. She had one of those real smiles and she touched Liz on her shoulder, standing close to her.
“Yes, that’s fine. Whatever you think. That will be fine,” Liz replied, looking past the waitress to the garden where some other women were strolling around.
“You can take your food outside. I can set it up for you. It’ll be nice to rest,” offered the waitress.
“No, I’m fine. I’ve got a bit of a migraine. I’ll stay inside.”
“That’s your choice but it might help you to go outside,” the waitress said.

Liz finished her meal, not tasting or enjoying it. Her phone had rung twice during her dinner. It was always her Mum. She wished she could just pick up the phone and tell her but it wasn’t that type of relationship. She remembered discovering the big mystery in an sex education class at school. She had legged it home, brimming with excitement at being part of this secret. This big private club that women had. But, when she confided her excitement in her Mum, she had snapped at her.

“We don’t speak about those things really. They’re not important. Just keep it to yourself and get on with it, Elizabeth. There’s too many women talking about those things. Too much of that talk and it might lead you somewhere you don’t want to be.”

And that was it. Liz had learned quickly that she could talk to her Mum about nearly everything but that. If Liz revealed her latest news, it would close everything off. It would wreck everything she had worked at to gain respect from her family. Her age didn’t help either. It would have been less horrific if she had been an innocent teenager, but she was many years off that now. She was not innocent. It had been her doing and her mistake.

She paid her bill and went to the garden. It was mostly empty now and it looked different in the evening. It was clear and fresh with none of the hotel air mixed in it. Liz sat at the edge of the fountain, touching where the water should have been. The moon was just in half mode, gearing up to its full performance.
“Lovely evening,” It was the waitress again. “You left your change.”
“No, that was for you. Thank you.”
The waitress sat down beside her, her dress rose up slightly, showing her plump knees. She pulled it down as Liz looked.
“So, you are only staying the night?” she asked, looking up to the sky.
“Yes. Just one night.”
“That’s it. One night should do it. Back to your normal self then after a rest,” the waitress said. The waitress was there, ready to listen. Liz wanted to tell her everything. She wanted to release it all but she sat there with her in silence. It was enough for both of them.
“Anyway, I’ll leave you to it. The best of luck,” the waitress said as she got up.

Liz sat outside until her headache was gone and her mind was clear and as she left, the first speck of rain came down. She opened her curtains wide in her bedroom and watched the rain pelt down on the hotel, into the garden and off the window. She left the curtains open that night, the moon’s charge coming onto her as she slept.

Rozz Lewis is a primary teacher living in Carlow. She runs a literary blog at rozz.ie and is a member of Carlow Writers at www.carlowwriters.org. She has been published in the anthology What Champagne Was Like, and literary magazines like Boyne Berries, Wordlegs, Silver Apples and Literary Orphans. She has been listed for New Planet Cabaret, Penguin Short Story and Fish Fiction Prizes.