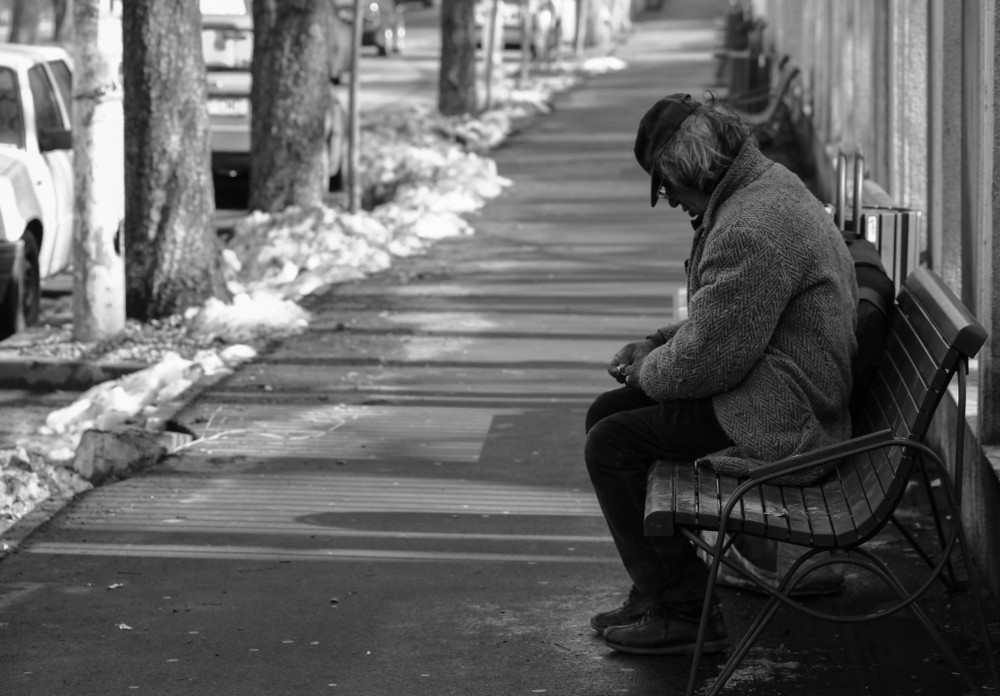 Melancholy by Harald Roman © 2014. Harald Roman is from Bucharest, Romania. His background is in geophysics but he has recently discovered photography and has grown to love it - because it gives him the chance to capture meaningful moments and share them with others, highlighting a different side to the world around us.You can explore more of his work on flickr and contact him at roman_harald@me.com

As regular as clockwork, they say. Same time, every day. Seven days a week. Hail, rain or snow.

He is an elderly gentleman, with wisps of white hair smoothed back neatly below a trilby hat. His faded shirt is buttoned all the way up and a drooping bow-tie rests beneath the folds of his neck. His outfit of choice is a grey tweed suit – three piece of course – with well-worn but carefully buffed brogues peeking from below his wide leg, turned-up trousers.

I watch him move up and down the same street corner every afternoon, pacing in quiet anticipation. He casts his eyes up and down the thoroughfares, occasionally stepping onto the street to better survey the crowds. Every once in a while, with a look of mild vexation creasing his features, he pulls a gold fob watch from his breast pocket and examines it carefully, squinting in the sun. The watch confirms his suspicions and there’s a barely discernible shake of his head as he returns it to its hiding place and resumes his pacing.

Up and down he walks, a time traveller moving invisibly amongst the t-shirt clad tourists. He steers his own straight course, oblivious to the curious passers-by as they step around him and turn back to better indulge their greedy eyes. The locals pay no heed, as he is as familiar to them as the traffic lights and parking cones.

Now and again he stops still, clasps his hands behind his back, and begins rocking on his heels, lost to his thoughts. Turning his face up to the sun, he closes his eyes and smiles softly, enjoying the simple pleasure of warmth on his skin. Then, with a start, he remembers his purpose, and returns to the business of waiting.

For waiting is what he’s done every day, for over fifty years. Every single day, they tell me. For his sweetheart, you see.

One afternoon long ago, he had paced up and down just like he’s doing now, in his best suit, waiting anxiously for her beautiful face to emerge from the crowds.

But she never turned up for their date. She was knocked down four streets over.

And now every day, he goes back to the street corner in time for their meeting, ten minutes early as always, dressed in the same suit, shoes polished and bow-tie straightened.

I stare at the old man, lost in his mental refuge, and imagine him greeting her with a smile, kissing away her breathless apologies. I can see him taking her arm and guiding her across the street, hearts full with a love that not even fate could destroy.

As regular as clockwork, they say.

A law graduate and student of creative writing, RM Kealy works as a business consultant byday and a freelance lifestyle writer by night. Based in the West of Ireland, she has published in magazines, newspapers and anthologies and is currently working on a novel of historical fiction, set in Dublin and New York in the 1920s. She tweets from @RMKealy.