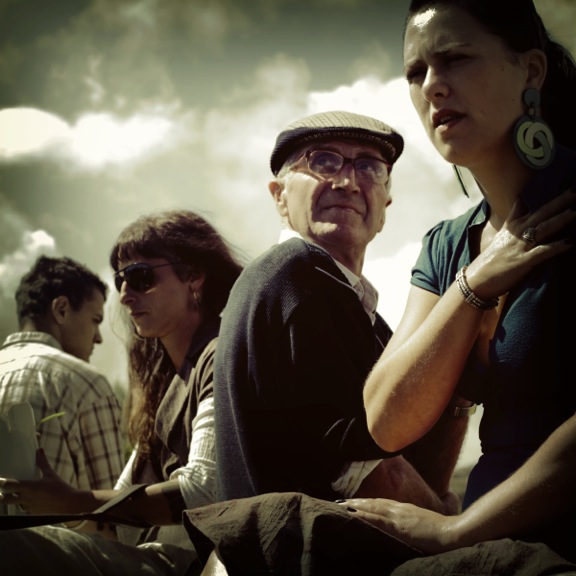 ‘WONDERFUL,’ I mutter as I consider the dark clouds jostling to hurl handfuls of filthy rain at our kitchen window.

“I can’t find a hairbrush,” says our little girl from the hall, staring listlessly at the floor. I go and pick one up from the glass table two feet from her face.

“Has anyone seen my locker key,” says the second eldest, prodding a pile of coats in a heap on the floor with his foot. “Have you checked your trouser pocket?” I offer, a suggestion met with a deep sigh before a brief, dejected search reveals said key in said pocket.

“I need three euro,” announces his brother between spoonfuls of cereal through a curtain of hair. “Look under the cushions in the television room,” I tell him.

It’s just another dark, winter school morning – only it’s not. Normally, I would look forward to the silence after the last slam of the door, the relief of a second cup of coffee while my wife does the school run and I settle into the quiet routine of working from home. But today I’ve a train to catch, a dispiriting prospect on such a gloomy day.

“Say hello to Dad from us,” says my wife, delivering me in the car to the depressing queue of soaked raincoats at the station.

I’m on the platform before I realise I’ve forgotten my phone, which makes the journey south seems endless and very lonely. The countryside peels away outside fogged windows until the train is trundling between high walls plastered with graffiti.

There’s little I recognise about the small suburban town where I grew up when I eventually get there. The shops I knew are gone. I can’t even find a ghost of the child I once was, or the friends I knew, or the years I blithely squandered, heaving school bags up and down the hill as I wished it all away.

Sally answers the door and welcomes me warmly in. “You’re right on time,” she says. “Go ahead, he’s waiting for you.”

I find him ensconced in the corner of a leather sofa and I look at the oxygen tank, his fingerless gloves, the stick-thin legs that I remember lying on the floor and latching onto as a child when his calves were still muscular from mountain walks, then he’d heave me around and bellow with laughter.

“How are you?” I manage. “Heh,” he wheezes, meaning ‘How do you think?’ – but what he says between short mechanical jets of air from a tube is, “Oh, just hangin’ in there,” and I make a thin line with my lips in the shape of a smile and we regard each other with glittering eyes.

I produce the hand-held voice recorder from my coat pocket like a magician performing a trick, press the button and place it on the little coffee table between us and we resume a weekly conversation we’ve been having and slip easily back through decades to World War Two, to saxophones and swing bands.

It’s the larger-than-life story of a man from an era I never knew, before he was simply ‘Dad’ – and, over the course of an hour, I revel in the anecdotes, highlight of which today is the time he played a gig with Louis Armstrong and walked in on the legend backstage to find him sitting in his underpants, smoking a joint. Chuckling as the digital recorder counts down far too quickly towards zero, it’s easy to forget why we’re here: to collect these stories to share after he’s gone.

When he shuffles off for a bathroom break, I look at the empty hollow he’s left in the leather and for a moment I’m overcome with the urge to put my hand there and touch the warmth.

“You must have your own memories of him, when you were a child,” says Sally as we wait.

I do, but where do they fit into all this? The feel of his bristles on my young face and the strong smell of his coffee and aftershave; the sting of English mustard in the freezing sandwiches we’d munch contentedly together beneath a tree halfway up a hill on one of the long hikes I would sullenly outgrow; the reassuring sound of him clearing his throat from behind his newspaper every night or his habit of standing noisily jangling the change in his pocket as I sprawled on the carpet trying to watch telly.

When he comes back in, it takes him ages to get his breath. “He’s probably had enough for today,” says Sally, gently helping him with a tangle of tubes as I nod my head uselessly.

Walking back to the train, the tickle of his whiskers still on my face from our goodbye kiss, I can’t help wondering, will my children ever be interested in asking me who I was before I was ‘dad’? What will they remember? What have I ever done that’s worth committing to a voice recorder?

When I finally fall in the front door, brushing off the cold, there’s a pile of school bags and coats in the middle of the hall. “Is someone going to pick these up?” I say, stepping over them into the warmth.

Our little girl is watching TV and I stand beside her and jangle the change in my pocket noisily.

“What are you doing?” she frowns.

“How about a hug for your daddy?” I tell her.

“Urgh,” she says without looking up, but I think I see a smile.

David Diebold has been a journalist with Irish national daily newspaper The Herald, for 15 years.He has had hundreds of articles published as a reporter, reviewer, social diarist, news, comment and feature writer. In 2011 he was shortlisted for Feature Writer of the Year at the National Newspapers of Ireland (NNI) Awards. He has since been a weekly columnist with The Herald. He is a regular panel guest and contributor to television and radio and has appeared on shows with Dave Fanning and John Kelly, has written and voiced for RTE Radio and was a weekly on-air contributor on David Murphy’s Newstalk 106 arts show.