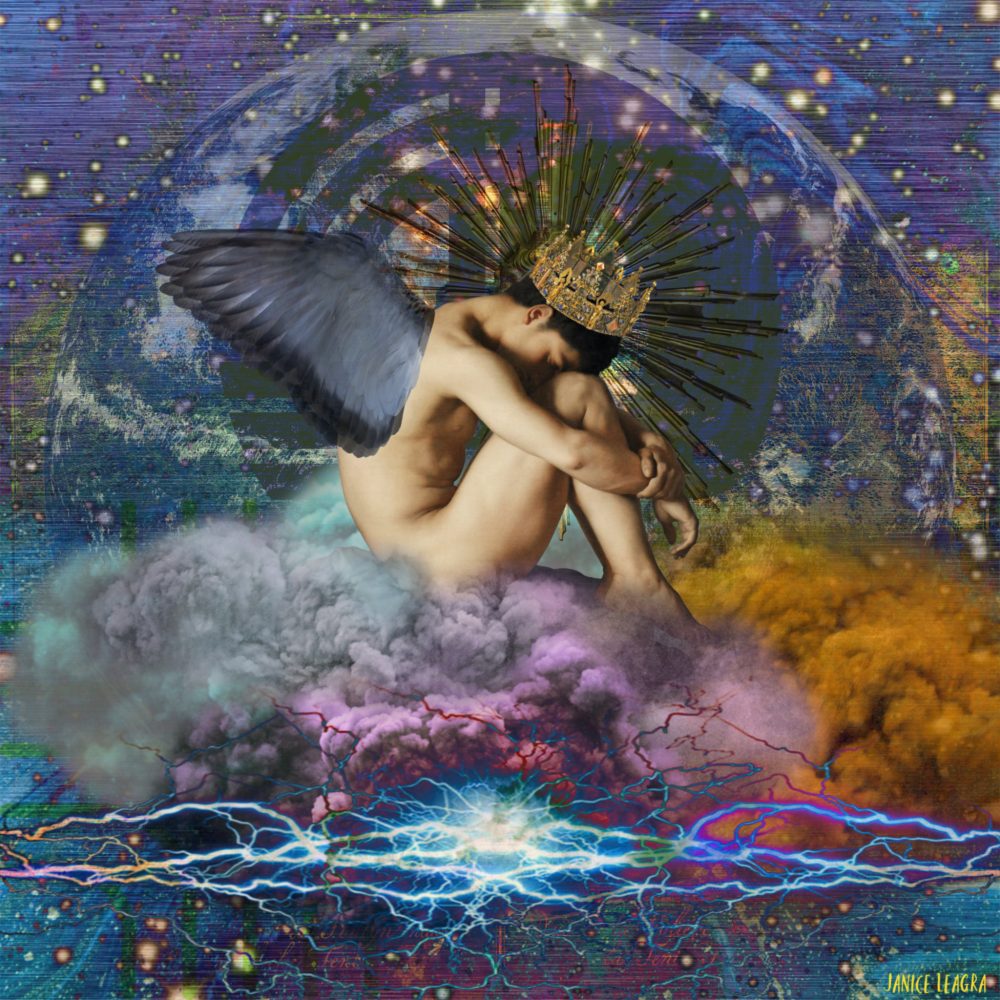 World Boy by Janice Leagra © 2019. Janice Leagra is an American writer and artist. She was shortlisted for the 2017 Bridport Prize for Flash Fiction and is a 2018 Best of the Net nominee. Her work has appeared in Spelk, Riggwelter Press, and elsewhere. She is Visual Editor for Splonk and reads for CRAFT Literary. Follow her on Instagram and Twitter.

Since god stopped looking after this place the boy has sat by himself. The sound that is left is mainly in his head, a faint buzz he is slowly getting used to. Wherever he looks there are children, adults, dogs. They all lost their home. Nobody knows where to go. Buildings crumbled to snow that won’t melt. No one seems to notice the boy, and no one asks about his ears. There are other things to do, so many things that people have started to walk in circles. From his vantage point on the curb he watches the young pull the old along. Sometimes the old people stop. They flinch and glare, at the ruins where the city used to be, at their sons and daughters mingling with strangers. Their fingers point wildly, like crows after gunshots, until eventually they continue their circles in slow-moving steps.

He spots two dogs fighting. All around them is rubble, above them the sun. Their coats matted, their eyes hostile, eventually they stop attacking each other, lie down side by side, then snarl again, can’t help themselves. It’s as if they are acting out what’s inside people’s heads. But nobody is watching, only the boy.

His own dog, small, brown and nervous, went missing the morning the bomb hit, an hour before it, maybe two. Nobody has mentioned this, and the boy wouldn’t be able to hear it anyway. All he would see is the movement of lips, the pale, cracked lips of newly homeless people. He hasn’t said a word. He’s scared of what his voice might do, now that he can’t hear it.

The Red Cross delivered a portable toilet. Every time the boy goes in he looks at his eyes in the door-mounted mirror. They are bigger than he remembers. Last month he turned eleven. No longer is he like the other children he watches the adults make a fuss over. He is here, though, part of the crowd, a boy people expect to cry. In the past, he used to run from the other children when they frightened him, but crying and running work differently in times of peace. He hasn’t cried since the bomb. He has eaten and slept beside his family in a gymnasium with high ceilings and camp beds, not speaking once. Sooner or later his parents will become suspicious, find out about his ears and take him to a doctor. Things will happen. He will still be eleven, and there will always be dogs other than his own.

Sometimes they fight – or worse. Everybody will tell you that.

He suspects this is the sort of thing the old people say as they walk their circles.

If he asked them they would shake their heads.

Asking questions, now, of all times.

He hears their voices inside his head, angry genies coursing through his blood. They surface when he feels guilty, as if he caused all this, crying too much, being too timid, the wrong kind of boy. He picks up a piece of broken glass and runs it along his bare arm, imagines people avoiding him like a hole in the road in times of peace. The thought makes him want to kick at the debris. There must be places untouched by the bomb. He doesn’t cut into the flesh. He gets up and walks, no circle, but a straight, long line beyond his family’s street. Eventually he starts running. When he reaches a corn field he lies down among the stalks, stares at the sky, waiting for god to appear, a large, sad face among fast-moving clouds, happy to take the blame, puzzled by people’s circles and lines, unsure who to help first, the old or the injured, their dogs. But there are no clouds this afternoon. God doesn’t show. It’s sunny, the sky a deep, endless blue.

‘Good boy,’ he used to praise his dog, and the dog’s tail would wag. Never once did the boy see him fight.

Susanne Stich was a finalist at the 2018 Irish Novel Fair and recently received a bursary award from the Irish Arts Council. Her short stories appeared in The Stinging Fly, Ambit, Boyne Berries and other magazines. She is also a filmmaker and curator, and can be found on Twitter @lilysimage.