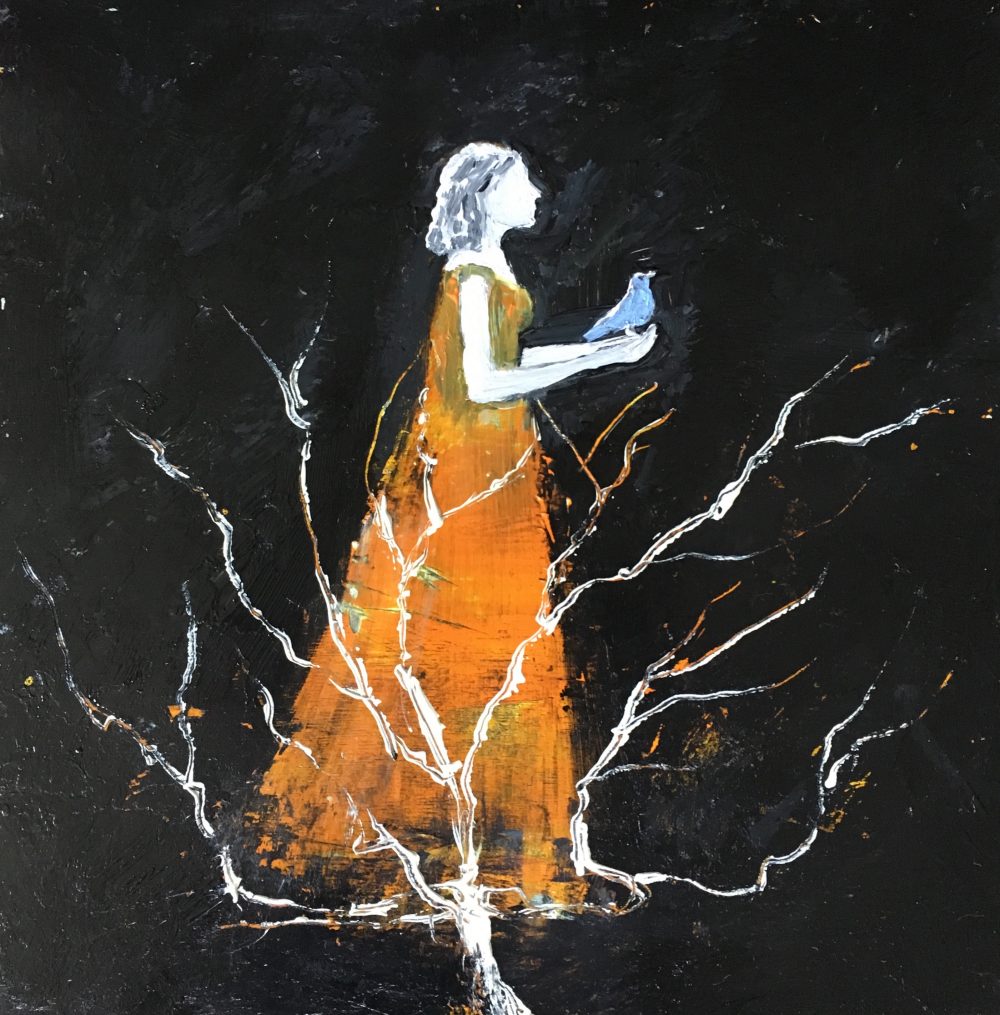 Security by Jeanie Tomanek © 2019. Artist Jeanie Tomanek draws upon themes that first developed in her poetry; exploring various feminine archetypes from myths, folk-tales, fairy tales and her own experiences. Her paintings have appeared as cover art for literary journals and poetry collections. You can view more of her work here.

I thought it was feathers, the tail of some bird. Then I peered out the window and saw a child with short sticking up hair. A boy of about five, just standing there. His yellow t shirt was yanked loose at the neck, stained at the stomach. He was very thin. I opened the latch.

‘Which one are you?’

I cut a slice of batch; he watched, fingers curled and ready. I spread the gooseberry jam right to the edge so he’d eat the crust. My lot always left the crusts. I handed it out and he gobbled it there on the spot.

‘Don’t you know how to say thank you?’

He came the next day, and every day after that. Dinner at his house must’ve left him hungry. She had two younger than him, and one on the way. He never asked to come in, but the weather got cold and he still had no sweater, no coat. Most children were wearing puffy anoraks with fur hoods. I had to invite him in, warm him up a bit. He just sat at the table and ate.

‘Can you talk at all?

His accent was posh. That vexed me somewhat.

‘Tell your mammy to feed you properly,’ I snapped.

He didn’t come for a few days. When he did, I was relieved.

‘Did you tell your mammy what I said?’

And so it went on, he was my weekday visitor. I don’t know where he went weekends. I didn’t mind him not speaking, mine never stopped. The back of his neck was babyish. She gave him woeful haircuts. Didn’t teach him manners either, I always had to remind him to say thanks.

He arrived once with a smaller, ginger version of himself in tow. There were snots running into his mouth, crusts on his nose. I waved them away. You couldn’t be looking at them snots. Next day it was just James.

Halloween arrived and children rang my bell. Witches, ghosts and clowns. Trick or treat, most said. One lot sang ‘My Bonnie lies over the ocean,’ I never knew it had so many verses. James came too, a white towel over his shoulders.

‘And who are you meant to be?’

I laughed and rubbed his head. It was nice to hear him say something besides ‘I don’t know’ or ‘I don’t remember.’ I imagined his mother teaching him those phrases. She was a tall, gormless woman. Did she know her son came to my house? Did he tell her? I couldn’t imagine them talking to each other, though of course they must have.

Next morning, my neighbour Con stopped me on the road. He nodded over to their house.

‘Did you hear about the boy?’

‘The oldest, the blond fellow…’

His next words were faint, as if coming from far away. I wish they’d never reached me.

I went into my own house and put on the kettle. I sat in the armchair and looked at the empty chair by the table. Why did I only give him one slice? Why didn’t I pile his plate high? Fill him full to bursting? It got dark. I didn’t turn on the light. Con said the boy had jumped out his bedroom window. Thought he could fly.

He’ll come now, I thought, the little snotty lad. He’ll come, and I’ll feed him. But he didn’t come. The council had them re-housed. I kept looking towards the kitchen window, like you do a TV even when it’s off. I was doing the crossword when I glimpsed a movement. I peered out. He wore his yellow t-shirt and looked at me the way he always did. Just presenting himself, hoping someone would read his hunger, and feed it.

I opened the door, and James ambled in. I buttered hunks of bread, slathered them in jam. I wanted to touch his forearm, where the gold hairs were. When he finished, he wiped his mouth and left. I brought the leftover bread outside and broke it up. The crows nabbed most of it.

He came most days, same time, same silence. After a while I noticed he was growing, not the way most do, but in leaps. One day he was the same height as me, just standing there, waiting to be let in. I got a pain in my chest. I rushed off and tidied the front room, acted busy, puffing up cushions, wiping picture frames. When I looked out the kitchen window, he was gone.

The next day he was back. I did the same thing, and the same thing happened. I remembered the day he died. How angry I’d been at myself. One slice. Only giving so much. Wasn’t I doing worse now? Leaving him shut out? But he would be a man soon, and for some reason, I couldn’t, I just couldn’t… I do believe if he had stayed the same, stayed a boy, I would’ve fed him until I died.

My days went on, each one as empty as the other. Martin was dead three years in December. The girls never visited. I was summoned to the eldest’s every Christmas. Turkey. Sherry. A nap in a paper hat. Dessert. So glad you could come! Goodbye! Nothing else was going to happen in my life. I would let him in.

I waited all that afternoon, darting to the window, switching the kettle on. He never came. The next day, I did the same thing, and the next but I never saw him again. I stayed home that Christmas. On the day itself, I took loaf after loaf out into the yard and broke them into pieces. I threw crumbs up into the air, fed the crows, the thrush, the sparrows, the robins. ‘Thank you,’ I said, finally, ‘thank you.’

Nominated for an IMPAC award, Niamh's debut novel THE HERBALIST was critically acclaimed and won Debut of the Year at the Irish Book Awards. Her second, HER KIND, based on the true story of Alice Kytler, the first woman tried as a witch in Europe, was published by Penguin in April 2019. An award-winning poet, Niamh Boyce was Hennessy XO New Irish Writer Of The Year in 2012. She lives in the Irish midlands where she is working on a new novel, and a short story collection.