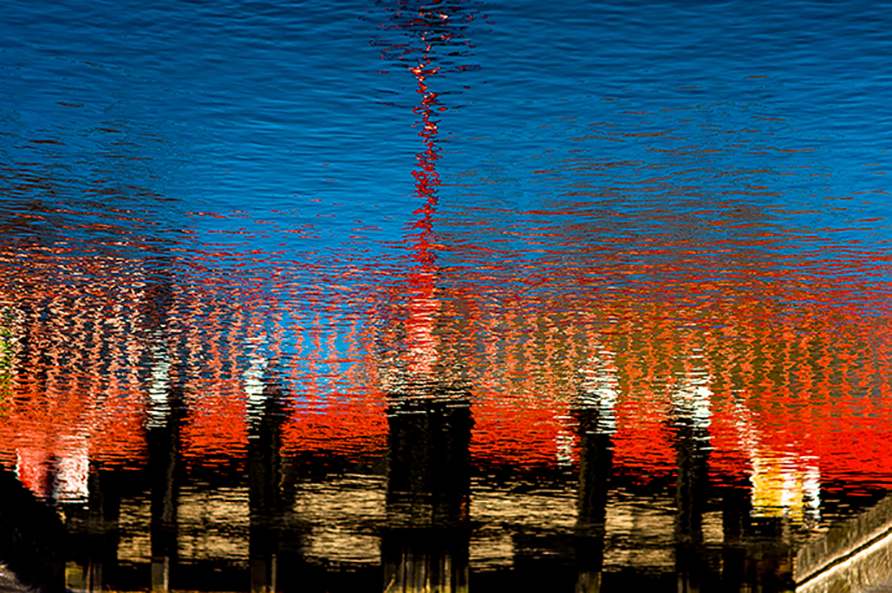 Light on water by Sanda Semelka © 2018. A print of this photograph is available at Take Heart Pop Up Art, all proceeds to Dublin Rape Crisis Centre. Sanda Semeika is a musician and photographer originally from Latvia who has been living in Ireland for 10 years. She is co-founder of SandS Photography. You can view more of her work on her Facebook page or follow her on Instagram.

He works his way through from the highest number (860 – streetlights) to the lowest (1 – river). When the nights are too cold to sleep he opts for alphabetical, flying over the streets in his head.

Sleep is elusive, impossible, but all energy is needed for the days of wandering. Pinballing around the city, waiting to be moved on. The sheer brain-numbing fucksakeness of it. Being kinetic in a city isn’t as easy as it sounds. Plugging into that energy from the outside, not being on the grid.

In the mornings, he people-watches. Swarms of corporate types bound for glass-glinted buildings. Purposeful women in trainers; expensive heels swinging from tote bags on suit-jacked shoulders. At night, he wakes from a barely begun doze at the clack of a heel, the unconfident teeter of a post-club girl pulling a polyester cardigan tighter, hoping in vain for the comfort of wool. He can tell the height and weight of women by the footfall of their shoes without opening his eyes.

Now a helicopter. A dull rotary thud in his head. Something like propellers slicing rhythmically close to his ears.

“C’mon, I tell you about this many times”.

The noise is of bristles, not some avionic mechanical beast. Vadim’s banter is usually firm, but not aggressive. It’s December and Dublin’s weather is two-faced. Some days the sun streaks along the ground, giving the promise of faint heat. On others, his balls are frozen to the path, his bladder swelling like a growth. The industrial brush scrapes past, causing him to shudder. Vadim sweeps methodically, fishing a wallpaper scrapper from his pocket for splats of chewing gum, which he works at with the dedication of a craftsman. A woodturner maybe. For a moment, he imagines Vadim smiling behind a table at a local fair, circular wooden bowls displayed proudly to passing browsers.

The sleeping bag offers little protection against the piss-stained concrete. Bone tired, he wakes in the same position he lay down in and now a pain winds its way from his lower back to the shells of his knees. Toe wiggle to check. Back, forth, up, down. Moving the ice in his veins.

He thinks of the blue-black tattoo on his foot, the swirl of her name and this brings her voice into his head. It’s been a week since he took his boots off, and years since he’s been in bed with a woman.

That night out after work was the start of everything. The heartburst of it, the sense that this thing between them was going to take flight.  Every morning he’d watch for her coming out of the lift. Over the sea of desks, the right-angled cubicles of commerce. Mock-furrowing his brow at the keyboard. Clearing his throat as if concentrating, his side-eye glances expert and furtive. The light in the building literally changed whenever she walked in.

Was that two years ago, or three?

When spring comes, he washes his feet in the Garden of Remembrance. Up and over the railings, before the park is open and a short paddle to get rid of grime. The cross shaped pool is reassuring even though he is no longer religious.

Peeling himself off the ground, he fishes his watch from the damp sleeping bag.

“Ever been in love?”

Vadim leans wearily on the handle of his brush, wondering if this is mockery or genuine curiosity.

“Once. Long time ago. Not here. Russia.” Vadim busies himself again with clockwise cleaning, the questionalready in the past.

One week it wasn’t Vadim, but another man in his place. No words are said and the man sweeps around him. He imagines his body as an outline, chalked liked a crime scene corpse.

Her smile flits in front of him now, so he counts car parks named after saints and colleges. The day rears up, a stubborn thing, urging him to move. To enter into the daily pact of crossing streets and traffic islands. To be surefooted on cobbles that rise like boils in the road. He will find Sullivan, who owes him money, but not spend it on a hostel. He cannot bear all that puckered snoring and fatal-smelling feet.

When he spends several nights on an old mattress behind Basin Street flats, a recurring dream infects him. He lies on a blood-coloured couch, the murmur of a party going on around him. In the dream, when he opens his eyes, there is always a small rabbit looking at him. They stare at each other and the creature smiles, before departing with a flash of impressive tail.

He saw her on a July night as daylight undercoated the plum sky. A taxi pulled in on George’s Street, and it was her hair he saw first. Longer, but the colour unmistakable. The same rigid swish as when she turned to him in meetings – serious, full of ideas – or later when they’d laugh in the pub. Clothes more expensive now. Taking cabs and not buses to meetings.

If he saw her now, would he speak? Would she?

People have a way of not looking. Maybe she would see him, and simply not know his face. Or perhaps she would, but in the moment of passing on the street, there would be nothing she could say. Too fleeting a moment to stack up all the thoughts and questions.

All day bodies and legs and arms pulse like the river, snaking around him. Stomping feet and car horns and ambulance sirens that now sound American. The sickening engine waft of buses and the passing exhalations of youthful smokers who feel they’re too immortal to give up yet.

There is comfort in the green stink of the Liffey, even though he knows many souls who chose to lower themselves into the dark soup of it.

Sometimes, he thinks the ground moves because he stares at it too long. It turns to water, ripples like the river’s shadow underneath the arch of each bridge. He imagines her, jumping in now, afloat on the water like Ophelia, garlanded not by flowers but plastic bottles and litter. She is Anna Livia Plurabelle. She is blue/green, her mouth in the mouth of the river. She is a journey to the sea, and he is already far out in the bay.  When he criss-crosses the city, day or night, he will look down and see her always. Dividing the city, a dagger of water through its heart, he will never lose sight of her.

All great men. All men, except Rosie Hackett.

Millennium(he loves this contradiction of old and new names)

There used to be a bridge that shared her name until it was changed and he says it softly, over and over. When he runs out of bridges, when he can’t name any more suburbs, when the parks and canal locks and old barracks have all been noted and named, he lies down under skies the colour of a bruise, closing his eyes against all that architecture, all that loss.

'Counting Bridges' is published in The Broken Spiral, all proceeds to Dublin Rape Crisis Centre. Sinéad Gleeson is a writer, editor, and freelance broadcaster. Her essays have appeared in Granta, Winter Papers Vol. 2, Gorse and elsewhere. She is the editor of three short story anthologies: Silver Threads of Hope (2012), The Long Gaze Back: An Anthology of Irish Women Writers (2015), and The Glass Shore: Short Stories by Women from the North of Ireland (2016) which won Best Irish Published Book at the BGE Irish Book Awards in 2016. Her collection of essays will be published by Picador.