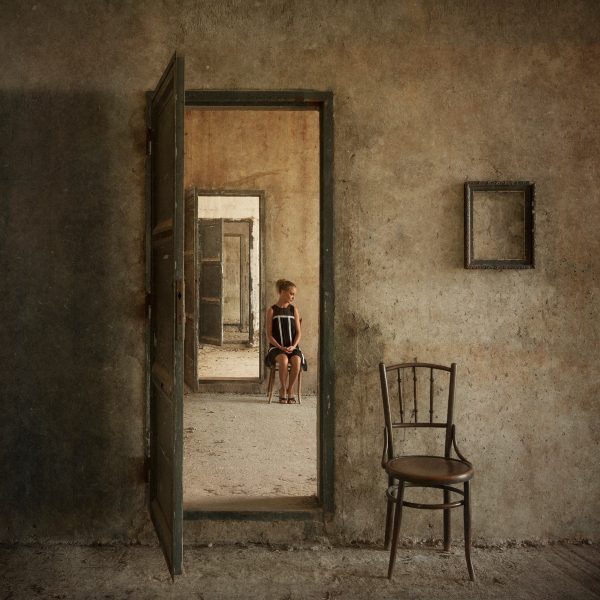 Vilhelm's Rooms II by Peter Zelei © 2017. Peter Zelei is a Hungarian photographer who specializes in portrait, conceptual imagery, landscapes and photo manipulations. He explores the divide between darkness and light, unafraid to examine themes that others may find uncomfortable. You can find out more on his Facebook page, or on artfinder.

Your knock is as sharp as ever. I hold the door open and invite you in. A fierce wind comes in with you. You brush off snow and stamp your feet. There’s a moment where we’re both standing in the hall, not quite sure if we should kiss or hug or just shrug at each other in hello.

Your face is creased and crumpled and you look shorter. How is that possible, for you to be shrunken like this? I always remember you as tall, not just tall but way taller than me. I loom over most men. It thrilled me to finally find one that I looked up to. I had to stand on my toes to give you the deep probing tongue kisses you loved so much. Now we’re not even at eye-level. I leave you standing and sit down on the sofa just to feel less self-conscious about it.

‘So, it’s been years!’ I say with brittle cheeriness. My voice is too loud. My mouth strains with the smiling.

‘I went looking for you a few years back. Davy said he’d seen you once down by the bridge but none of us believed it. I’ve only coffee. ’

I busy myself with the machine and the grinder, dig out two of my nicer mugs, nice rough pottery ones, the ones I only use when I have guests. The tedium of entertaining. The clank and whirr and farting of the machine fills the room and I am aware of your body near me. You’re not looking at me, I know that without turning around. You’re browsing my shelves, looking at my books, checking out my CDS, picking up knick-knacks. I finally chance a look. From the back you’re still broad and powerful looking. I gaze at your arse. I remember how nice it used to be, how I used to love watching you walk around the flat in just your skivvies, not for the bulge of your crotch but the curve of your bum. I can’t tell now if it’s still nice. You’re dressed in baggy and tatty jeans and your backside could be the size of the moon and similarly pitted and cratered, or it could be as pert as a fucking peach.

You’re tapping a tattoo on the shelves in that way you always have when you’re getting ready to say something important. Are you judging me? Does the flat, mine now, once ours, meet with your approval? In a fit I painted the walls a deep dirty red after you left.

‘Your stuff is all gone. I packed your things up ages ago and brought them to a charity shop. Some stuff I burned. I think it was a ritual.’

‘A cleansing. But I did keep that awful t-shirt you used to wear.’

‘Which one precisely?’ You have that weird smirk, puzzled and superior at once. Of course you acknowledge you had several appalling pieces of clothing, all of which you refused to throw out even after they started falling apart, and how like you to want to be exact about the one I saved.

‘Do you still like coffee with your sugar?’ Your sweet tooth was a joke between us. I’d wonder how you’d ever be able to suck my blood after your fangs rotted and fell out.

I hand you the mug. I notice your nails are filthy and ragged, chewed down by those perfect fangs of yours, and a memory almost undoes me, when you used to pick me up and scratch my back to bleeding  with those nails as you bit my tongue and lips and throat and tits.

‘Seriously, where did you go? Have you really been here the whole time? I thought you’d be off around the world. Swanning it in the Caribbean or seducing Californian girls with your lovely Oirish brogue. Or hanging out in an ashram in India hitting all the yoga chicks.’

‘You mean hitting on.’

‘Sure.’ I sip my coffee. It tastes like burnt toast.

‘No. You don’t still think that’s my thing, do you? The chase? After all this time?’ You tilt your head and arch a brow and quiver your lips into a grin: your come now don’t be a silly girl face.

‘Your kind tend to disappear into the shadows. All the better to prey on virgins. Do you still go after virgins?’ Melanie’s silly young face pops up behind you. And Jane. And that ginger bitch from across the street. And all the others. I squeeze my eyes shut to banish them. When I open them you’re right there in front of me and somehow tall again, hunched over my throat. I forgot your stealth.

‘I didn’t go anywhere. I just left your world but I stuck around the city. You could’ve found me easily. You probably saw me tons of times and didn’t know it was me.’

Your breath dances around my pulse. I can smell you now that you’re so close. You have the old cabbage smell of the unwashed.

‘I’d offer you the couch to sleep on but it’s not comfortable at all.’

You take a theatrical stride backwards and ease yourself up against the wall, like a rock star in an album cover. The walls of the flat always looked like they were only ever made to hold you up.

‘Did you know that I used to watch you getting off the bus? Near that job you had. Every morning at the same time.  A grande latte and a muffin from that little place on the corner before trotting up to your office.’

‘Really? God, it’s been years since I was around there.’

‘That shop’s gone now. The whole street’s gone, actually. They tore it down to build a massive hotel.’

‘And you never thought to say hi?’

You blow on your coffee to cool it off, a wraith of steam curling around your head.

‘I know you’re not a morning person. Fierce look on you before you’ve had your first dose of caffeine. I see you have an ultra-trendy shite coffee maker now.’

‘My coffee is not shite.’

‘All coffee is shite. That’s why it’s coffee.’

‘Would you prefer a beer? Or wine? I don’t have any spirits.’

‘I can smell gin coming from the cupboard.’

I pull open the cupboard door. An almost empty Beefeaters sits looking as innocent as a bottle of water.

‘Jesus, I forgot I had this.

‘I forgot that about you. Your sense of smell. It was always keen.’

‘Keen is the nice word. There were times you didn’t like it.’

‘I didn’t like it when you knew before I did when I was coming down with a cold. Or when I was about to be on the rag.’

‘And you look good. I mean it. Not messing. You still look good enough to eat.’

You deliver that line like an old ham in a second-rate play. I grip my mug.

‘We’re not sleeping together. Understand? I don’t want a roll in the sack for old time’s sake.’

‘Good. It would probably be terrible.’

‘Thanks!’ I mean it to sound jolly but it comes out like a mangy dog that’s been kicked a lot.

‘Not because we wouldn’t try to make it great. Capture the old magic and whatever. But I can’t do it anymore.’

You look at me and a bristle of heat buzzes my face.

‘There’s just no desire. For anything. I can’t stomach booze either. I can’t even keep a dry sherry down. There’ve been rumours. They’ve put something in the water. Only goes after my kind. Dulls the libido. Dulls everything.’

‘Exactly. And there’s an app, supposedly.’

‘A tracking thing. It tells you where we are so you can avoid us.’

I study your eyes as you speak, looking for a hint of bullshit. You were never one for conspiracy theories, but you do so dearly love being the centre of attention.

‘And why would I want to do that?’ I no longer care how my voice sounds. Yours is as pleasant and calm and fucking level as ever.

‘Because you have a nice kitchen and nice books and an uncomfortable couch.’

You put your mug down.

‘Thanks for the shite coffee. I’m glad you’re well.’

You move to the door, rest your hand against it, turn back to me.

‘You didn’t have to invite me in, you know. You know the rule.’

You open the door and step out. I stand on the threshold for a long time and watch your retreating figure slowly grow smaller and dimmer, and I listen for the sound of your boots crunching against the frozen ground, but there is nothing, and it’s almost as if you’re simply floating away into the night, gently carried by the snow fluttering around your shoulders like a pair of wings.

Niall McArdle is a writer, blogger and critic from Dublin. He has been nominated for the Hennessy Literary Awards and the Francis MacManus Short Story Competition. His work has appeared in the Irish Times, Banshee, Spontaneity, Honest Ulsterman, Phoenix Irish Short Stories, and has been broadcast on RTÉ Radio. Follow him on Twitter.