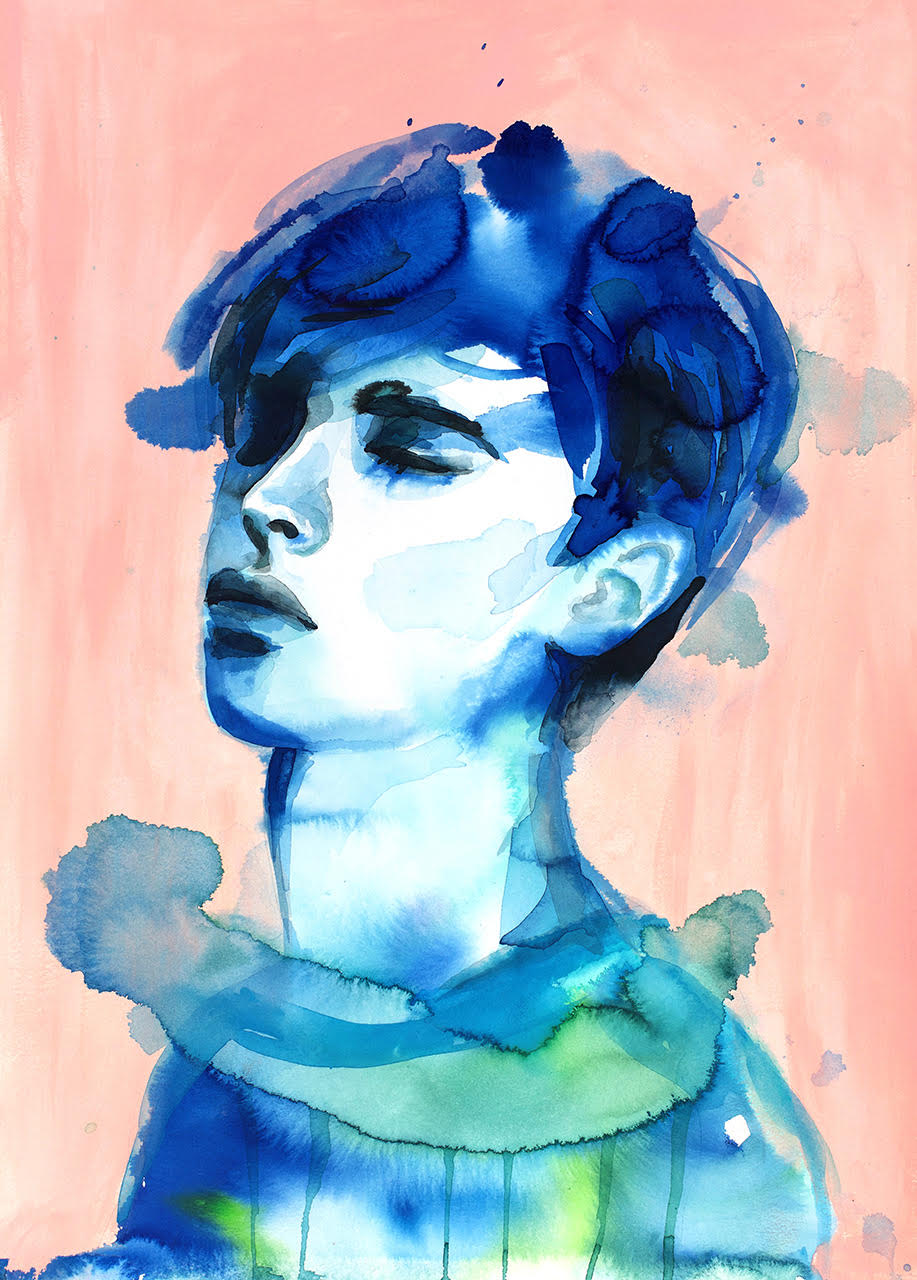 Oliver by Natalia Berglund © 2017. Natalia Berglund is a visual artist, who works in various mediums with a primary focus on portraiture. Natalia was born in Minsk, Belarus, where she attended the Minsk Art Lyceum. She later received BS in graphic design from the University of Minnesota. She currently lives and works in Minneapolis, USA. You can find out more on her website, or follow her on Instagram.

He doesn’t know it, but he has beautiful hands. It’s what made her want him in the first place. Long tapering digits, warm muscle and bone, and narrow wrists stronger than you’d think. Or so she imagines. She shouldn’t be thinking this way, not on a first date. She’s sorry for objectifying him. Her mum always goes on about how saying sorry a lot is bad. It’s conditioning, Mum reckons, makes you think a certain way, negative thoughts, feel things that aren’t real. But who did the conditioning, in the first place? It might be her mum to blame, did she ever think of that?

She stared at those hands when they first met. He’d held out one hand, the cuff of his shirt shrinking back and showing her the underside of his wrist. Clean white skin that made her mouth twitch, she wanted so badly to kiss it. Tonight, he doesn’t say much. They communicate with looks and glances. The odd word is all they need. She leads him to a tiny Italian restaurant in town, one she passes each lunch time and sees happy people on the other side of the glass. Inside, it’s rustic, cosy, like a family home in Rome. But really, the restaurant is not great. The waiters exaggerate the menu with dramatic flourishes, yet she and he dine on food less than fine, and sip wine the vinegary side of good. He holds his wine glass with more elegance than it deserves, his fingers wound around the sturdy stem like a curled leaf. Green and white tablecloths, the wipe clean kind, the green on the throwaway napkins replaced by bursts of red, are a feast for the eyes at least. As is he; she drinks him in. He reaches for her fingers, warms them with his. The nail polish on her right thumb nail is chipped, she notices, a straight edged square at the nail’s tip peeled off and dropped god knows where. She’d spent ages doing her nails, to make them nice. But he doesn’t seem to notice the flaw, or see she’s not quite perfect. And yet, it’s his breath on her right now instead of his mouth. All he has to do is edge forward a tiny bit more. Her belly tightens. It hurts. It’s a good pain. One she never wants to go. It’s being on a rollercoaster, right at the top bit before it dives down. You know about the rush, then the sweetness of it at the end, but cling on to the safety of not quite knowing.

He smiles, and his face lights up, properly. Not just how she reads about in books. She feels it for the first time, she can see it too, the invisible rope linking them, tightening, and pulling, heart tied to heart.  He is beautiful, she realises. It’s not just his hands.

After they eat, he walks her to the bus stop. It starts to rain. Fine strings of water stretch downwards from the sky, the type to soak you right through if you don’t watch out. He takes off his coat and holds it over her head. As the strings thicken into sheets, he tugs her arm and they fall together into a doorway. He whispers into her hot hair. She thinks filthy thoughts. He takes her to his house. Rather, the bus does. It takes forever. She wishes she could drag him off the bus and run home with him, right now, but instead, they sit on the back seat and he presses his lips, the exact right amount of firm and moist, on hers, and gently strokes her cheek with the cushion of his thumb.

‘You thought something just then.’ He stares at her. How did his eyes get so dark? ‘About my fingers.’

Her belly turns to liquid.  ‘I wondered…’

‘There was more. What else?’

‘And other things. I’m sorry…’

‘Don’t be.’ He breathes out, hard. She’s mortified, for a split second, but thinks about his hands again, on purpose. He blinks, startled. It’s cute.

They snog for a bit, tongues twisting and dancing.

‘Hey, pack it in you two!’ the bus driver shouts.

‘Sorry,’ they chorus, in unison.

But they don’t mean it, not one bit.

She places his hand on her lap. Stroking it, she traces the bumps of his knuckles, the tiny circle of firm skin on his first fingertip, the one you can’t see but feel it well enough once you know it’s there. In exquisite detail, she thinks silently about what is to come, and enjoys the long, delicious journey to his bed.

Cath Bore is published in a number of places, including Mslexia Magazine, Spontaneity, and NFFD anthologies.  Her essay The Housework Issue (The Other One) is included in Know Your Place, a collection of writings on working class culture and life, published by Dead Ink Books in Oct 2017.