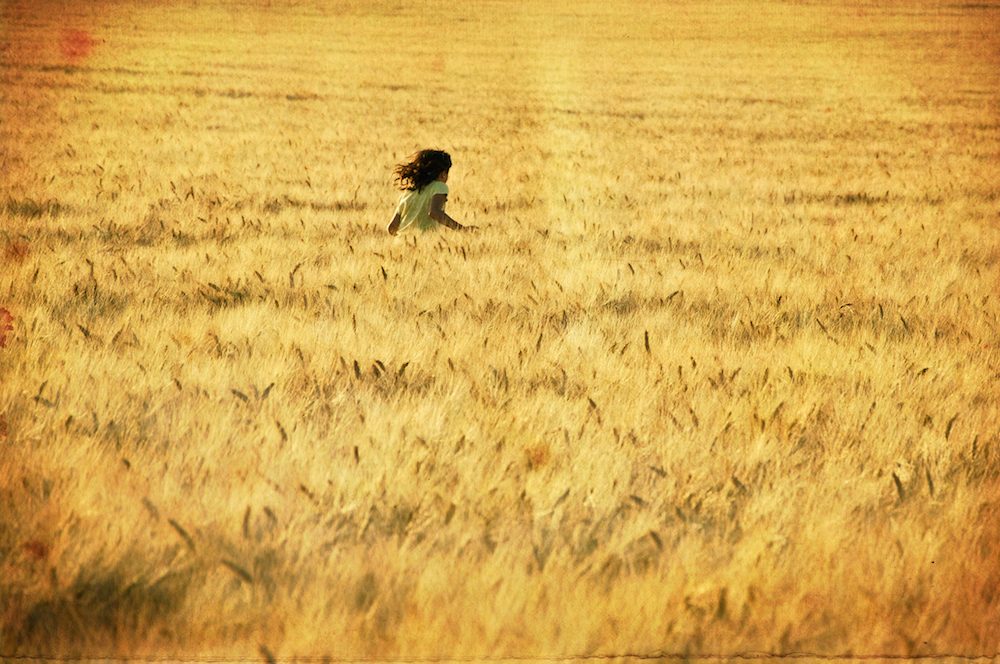 Summer symphony by Emilie Mori © 2016. Emilie Mori is a Franco-Swiss multidisciplinary designer whose focus is on conceptual photography. She lives and works near Paris & Bordeaux, France. You can find out more on her website or find her on Facebook.

Jack climbed to the top of the macrocarpa and found River already there. She had the young blackbird in her cupped hands and was telling it about the things it would see when it flew. Jack had watched her doing this every day for the past week, and still the bird showed no signs of wanting to leave. Jack didn’t blame it for that. The bird burrowed further down into River’s hands. But River was patient. Jack thought she was probably the most patient person in the world. She opened her hands and told the bird it would know when the time was right. The bird quivered. River waited. Jack held his breath. The bird spread its wings. Jack let his breath out slowly and watched the bird fly away until it was just a speck against the band of the nor’west arch.

He crawled along the branch to River. Beads of rain shimmered on spider webs stretched like torn lace between the branches.

“That blackbird was lucky,” he said. “He would have died if you hadn’t found him.”

She asked him to tell her about the best bits of his day. He told her he’d seen the waning crescent moon as he walked to school. He described the sound of cracking ice when he walked through frozen puddles, the patterns of his breath on the morning air, the frost on the gorse hedges, the coral-tint on the ridge of the Alps, the yodelling magpies and the shrill cry of pukekos.

River listened then asked him to tell her about the worst bits. He told her about the big kids who tripped him up in the playground because of his small stature, his blond hair, his glasses, because he hated football; the teacher who wouldn’t answer his questions because the new system meant he was supposed to check with his peer group first and they all had to work as a team and when he did ask them they told him he was stupid, so he still didn’t know how the sun and the moon and the stars stayed in the sky; how birds knew where to go in the Autumn and how they could fly long distances without getting lost.

When he finished telling her all this River told him what he wanted to know about the sun and moon and stars and the navigation system of birds. She told him about the way the moon influenced tides and the way dolphins communicated and how giant turtles swam great distances to return to the place they were born to lay their eggs. When she finished they watched the night fold itself around them. They breathed the scents of eucalyptus and pine.

River asked where his mother thought he was now.
Out in the paddocks helping his father.
And where did his father think he was?
In his bedroom, reading.
She asked if he wanted to go home.
He shook his head. He asked her where she went each night.
“Over the hills and far away.”
He asked if he could go with her.
“You can,” she said, “But you wouldn’t be able to come back.”
“That doesn’t matter,” he said.
“In that case,” she said. “We can go when you’re ready.”

Sandra Arnold is a New Zealand writer with a PhD in Creative Writing from CQ University, Australia. Her work has won several awards including the 2014 Seresin, Landfall University of Otago Press Writers Residency and the 2015 New Zealand Heritage Week Short Story Competition. Her flash fiction has been published or is forthcoming in Jellyfish Review, Flash Frontier, The Linnet’s Wings, Flashflood Journal, The Story Shack, Fewer than 500, Fictive Dream, Olentangy Review, Zero Fiction, We are a Website, North & South and Headland. You can find out more here.