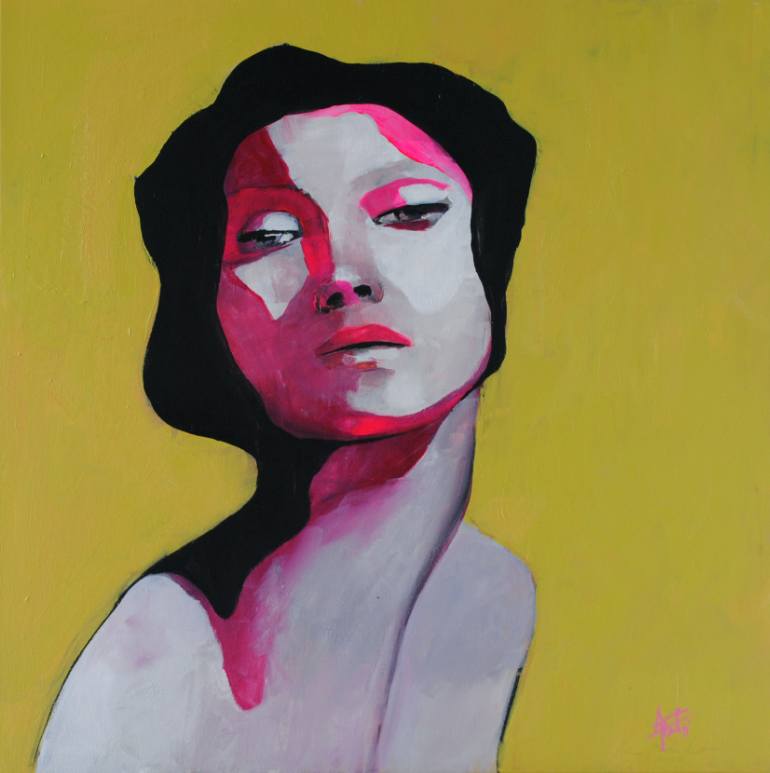 Firewalk with me by Anna Matykiewicz © 2016. Anna Matykiewicz is Polish born, living in Ireland. She works in watercolours, acrylic, oil and ink. She completed her B.A. in Visual Communication in 2005. You can follow her on Twitter, find her in the Saatchi gallery, and see more here.

‘My sons already set up the trampolines, they’re great if people bring along their critters. Kids don’t care much for starin’ at a stage all day and the sun boilin’ their heads.’

Peggy smiled at the young stranger who sat next to her on the bus.

‘You been to the festival before?’ Peggy asked.

‘It’s my first time,’ the young stranger said. ‘I’ve only been in Damascus for a couple of months.’

‘What brings you to our town, other than the biscuits and gravy at my diner?’ asked Peggy with a smile.

‘Well, you know that sign outside of town that says ‘I’ll pick up old lawn mowers’? That’s me,’ said the young stranger.  ‘Sign’s on my uncle’s property. He grows ryegrass. Seems to do real well. I’m stayin’ with him for the summer.’

‘You’ll like the bluegrass festival. Lots of pretty Oregon girls. We’ve been workin’ it for years. Ever since Bobby died, I don’t have to carry a thing. My boys and my daughter-in-law do all the work. I just get all bossy once I get there.’

The bus passed fields with dusty tractors and horses eating grass; brown cows with white faces swished flies with their tails. The bus passed a gray train bridge. High above the dark power lines a hawk took his time hunting for brown rabbits. The bus slowed by the tire store, then crawled past a pile of rusted barrels that sat in front of a  For Lease sign in front of the welding supply store and then inched past the locksmith. The bus stopped in front of the mission store. The bus driver stood up.

‘It’ll be one hour and ten minutes when we take off again,’ the bus driver said, ‘so if you’re gonna leave the bus, then be back in an hour.’

Across the aisle from the young stranger sat an old man in a flannel shirt and an old green baseball cap with a logo on the front, asleep with his mouth open; the woman next to him looked out the window. The old man twitched from time to time as he slept. He had white hair and long white eyebrows and a pointy Adam’s apple; after a while he stirred. The woman took two sandwiches and a well-ironed cloth napkin out of a large cloth bag. She took out two small bags of potato chips. The old man wore aviator-style glasses and whispered to the woman; she laughed and ate the potato chips. The old man’s weathered hands used the napkin to wipe his nose; he then carefully folded the napkin. The woman took out two candy bars, but thought about it and returned one to the cloth bag and handed one to the old man; he put it on his lap. The woman took out a water bottle with a milky liquid in it and with a cloth wrapped around it held by rubber bands and handed it to the old man; the ring fingers of both the woman and the old man had gold bands. The old man took his time, washed down the chocolate bar with the milky liquid, wiped his mouth with the cloth napkin, and handed the napkin back to the woman. After a while, the woman took out a ziplocked bag with cough drops in it and handed one to the old man.

The young stranger got up and walked down the aisle.

Peggy brought a flower pot to the pretty girl by the cash register wearing a blue smock.

‘This one doesn’t have a price on it,’ Peggy said.

‘How about two dollars?’ said the girl in the blue smock, with a smile.

‘How about ‘Sold!” laughed Peggy.

The young stranger milled about the used paperbacks, glancing over towards the cash register from time to time. A boy locked up his bicycle outside and came in and bought a belt. Peggy returned to the glass gifts and picked out a glass horse; she walked back to the girl in the blue smock, who was talking to the young stranger.

‘Sorry to be so rude,’ laughed Peggy, ‘but we got another price tag problem.’

‘How about one dollar?’ said the girl in the blue smock pleasantly.

‘How about ‘Deal!” laughed Peggy. ‘What is your name, sweetheart? I can’t quite make it out on your tag.’

‘Shabba,’ the girl in the blue smock replied.

‘I’m tellin’ you,’ said Peggy, ‘first thing buy yourself a bottle of water and make it your best friend,’ she said. ‘I’ve seen people every year faint from the heat like nobody’s business.’

Many years later, Peggy recounted this story to a customer at the diner.

Peggy said: ‘And you know what happened? About five years after I met ol’ Billy I was makin’ the same bus trip in the heat. And the bus driver stopped at the same old mission store. And I was on my way in, and I saw a padlock, the color of a penny, wrapped around the bottom of the bicycle stand. And I don’t know why, but I walked over to the padlock and bent down and looked at it real close. And on the back it had black writing with a black marker. It said: Shabba and Billy Forever.’

Jerry Cunningham has been writing full-time for two years and has written a play about Guantanamo Bay, an essay on the education laws during the days of slavery in the U.S., and short stories. Prior to that he practiced law (in Los Angeles) for many years, publishing copiously in the legal realm, and then taught at a local college in Oregon. He was born and raised in the Bronx. He lives in Oregon.