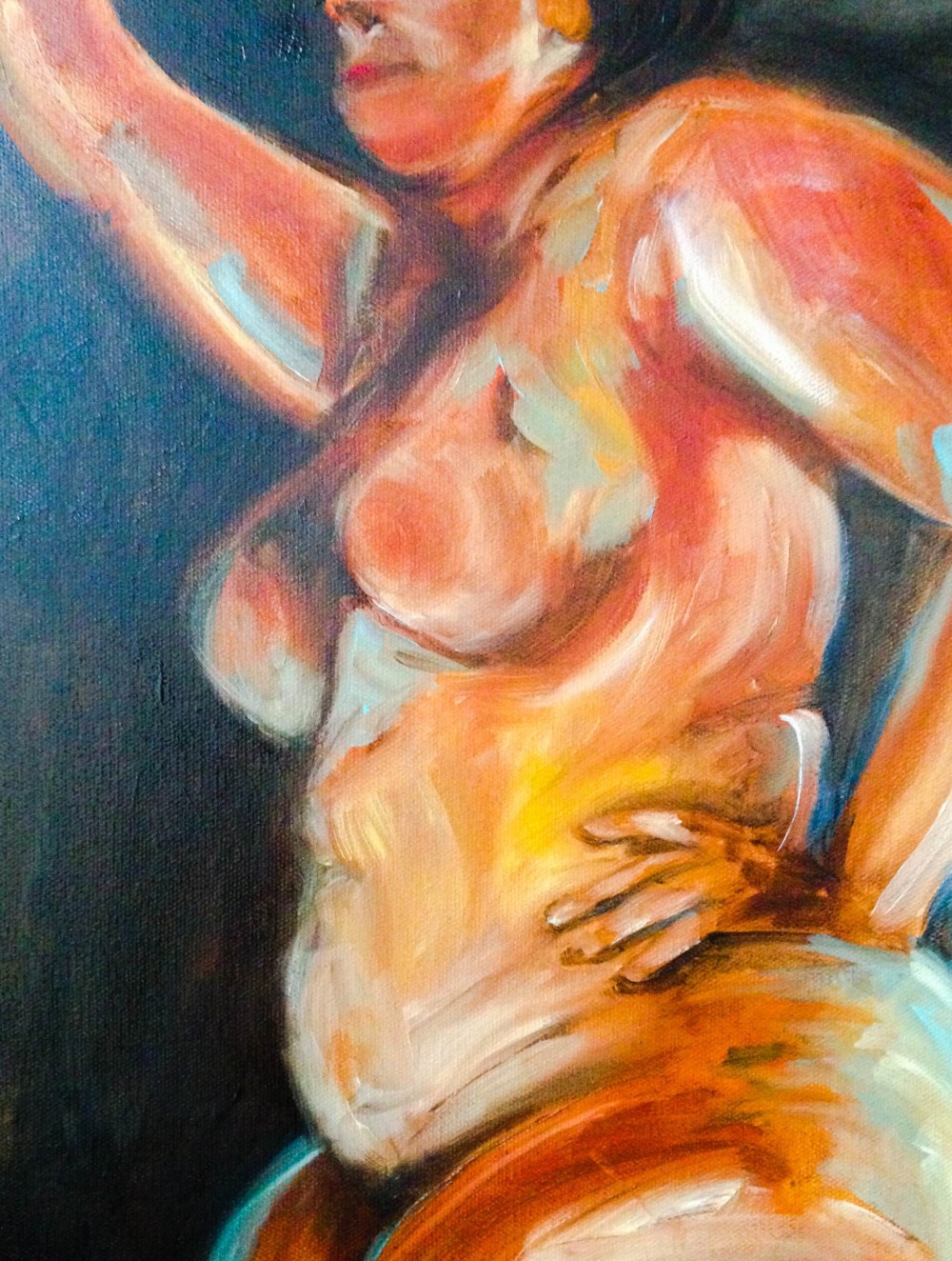 Full Figure Study by Shawn Vose © 2013. Shawn Vose is a relative new comer to art; after losing his way for most of his early adult life he is finally finding meaning and peace in his life via artistic expression. Painting and the creative process has allowed Shawn to fall in love with each one of his paintings but what really resonates with him is how his creations can bring others happiness. It is a very new concept to him. He is infatuated with the human form and the mechanics of its movements, particularly how it ages or changes from wounds, emotional or physical. You can explore his work at shawnvoseart.com

Peeled down to me underwear, I dunno what I’m doin’ on stage. Can’t remember gettin’ up here. Don’t wanna know what a fool I made of meself clamberin’ aboard, all skew-eyed an’ podgy.

‘Specially not after the last act. She was deadly. All white feathers an’ pearlies, legs up to her ears, the bitch. No Stumpy Joes, like me. Me dad always says I shoulda been a boy, coulda played for Munster.

Swing band cranks up big style. All fancy beats an’ jinglin’. I start me gyratin’ – like I saw the feathery one do.

– Show us what yer made of!

The crowd, all claps an’ whistlin’ two fingered, like callin’ a dog.

If I were a dog, I’d be a boxer. Strong an’ dopey. Dopey enough to get me kit off in a burlesque bar, surrounded by beauties. An’ me, ugly as a boxer chewin’ a wasp. Gettin’ ahead of meself, I was. Now I’ve caught up, I’m screwed.

Christ – me bra ‘n’ knickers don’t even match. Yellow an’ purple. What was I thinkin’?

‘Gis yer hat, ta very much. Pass us yer cane, lad. Nice red boa missus! Can I borrow it (hide some of this flab)?

Gotta do somethin’ impressive. Better to make a total saggy tit of meself than stay here lumpish an’ wobblin’. Reach round to me bra clasp. A teaser, buyin’ meself time. But the crowd gets wild.

More whistles. Sounds like four fingers this time. What would a boxer dog do if someone used a four-finger on ‘im?

Cheeky peek. See who’s out there. Hope I don’t know no one. ‘Cept Dave – an’ he don’t count. Fancies blokes, like.

Christ, where is he? Not that he’ll care. But he’ll still be gawkin’. Judgin’ with that squinty look.

More fiddlin’. Hands all greasy an’ fumblin’. Runnin’ out of jingle jangle. Gotta do somethin’.

So long as there’s someone worth pleasin’, I say. Man of me dreams might be out there. Watchin’. Likin’. Plenty of me to like an’ all. Yer never know!

Jesus – look at ‘er over there. She should be up ‘ere, not me. Like a movie star, she is – all skinny arms an’ sequins. See those diamante lashes batterin’ an’ flashin’?

One more bat an’ – whoosh! – me bra’s flyin’ across the room like a big lemon parachute. Not even got any nipple tassles. Showin’ me whole diddies an’ everythin’.

Reckons it’s her lashes what did it. Whipped the bra right off me!

No more ‘boxer Maur’. No. I’m a great big eagle, all gold an’ shimmer. Guidin’ the lads. Me audience. Me worshippers.

If they use any more fingers, they’ll choke ‘emselves. We’ll ‘ave to call casualty.

Band slowin’…Slowin’? What do ya do when the band slows?

All that clappin’ an’ hollerin’ makin’ me deaf.

Lights comin’ on? Jesus, no!

An’ the girl with the eyelashes.

Me face as red as the theatre seats. Red as the boa. Wrap it round, cover the old diddies. Nipples an’ all.

Throw out the cane. Pull the hat down over me face.

Gather me clothes up. Me flesh foldin’, squashin’ me belly into one great big smile.

Elizabeth Rose Murray (represented by Sallyanne Sweeney of Mulcahy Associates) lives in West Cork where she fishes, grows her own vegetables and lives for adventure and words. She has been shortlisted in the following competitions: Francis MacManus 2013 (Short Story), Penguin/RTE Guide 2013 (short story), Powers/Irish Times 2013 (flash fiction), Writing.ie/Anam cara 2013 & 2012 (flash fiction), Writers & Artists/Anam Cara 2013 (flash fiction) and Aesthetica Creative Works 2011 (poetry). You can chat to her via her blog here on Facebook: /ERMurray.Author or twitter: @ERMurray