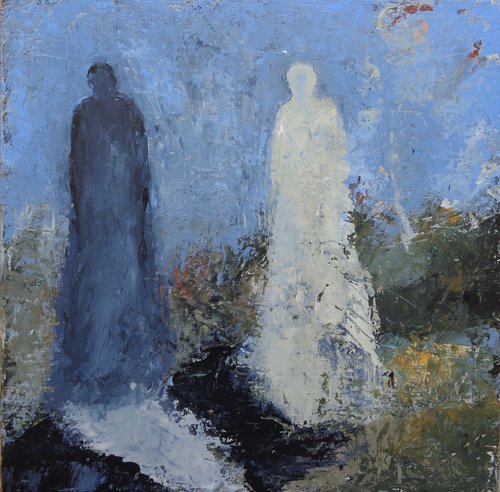 Shadow Casts by Jeanie Tomanek © 2019. Artist Jeanie Tomanek draws upon themes that first developed in her poetry; exploring various feminine archetypes from myths, folk-tales, fairy tales and her own experiences. Her paintings have appeared as cover art for literary journals and poetry collections. You can view more of her work here.

By Bois de Faisán, where the pheasant still squabble and rush in regal livery, lies my Jack. He fell at Fromelles and, though they had slaughtered him, they say the Germans gave him a decent burial. I wonder what lies with him: my photograph at his breast? His gas mask tucked under one arm? Do his gold fillings glisten beneath the earth the way they did when he threw back his head in laughter?

Sticky blue clay holds my Jack, the way our marriage quilt once held both of us. I sleep under it now in hope of this: that Jack’s babe, snug in the nest of my womb, will never know the heft of a gun, the sorrow of a stupid war, or what it is to live life without breathing.