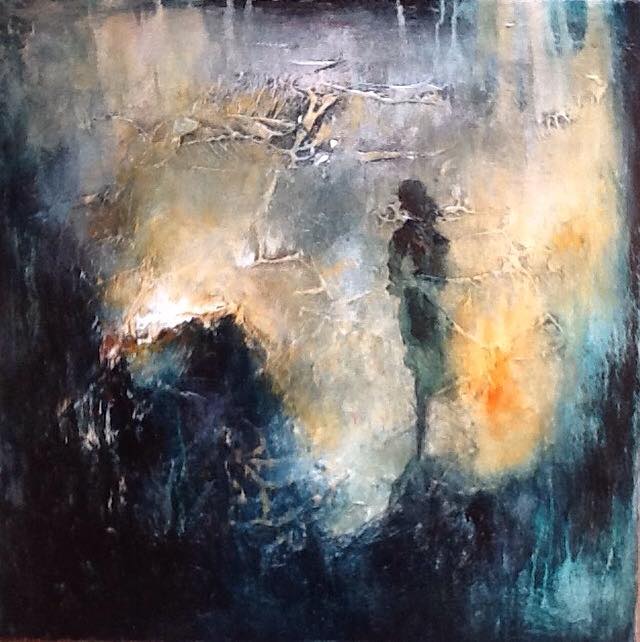 Looking forward by David Lee © 2017. David Lee is originally from Galway now living and working in Berlin. He left college to pursue his art career at the age of 19. He is self-taught so his approach is non- traditional and has no limitations. He is drawn to figurative work and his paintings have a distinct flavour of the past with a sense of nostalgia. You can find out more on his Facebook page.

Jenny wears a clap-and-shriek outfit to court. But that’s Jenny, the gaudier the better, and this dress is sunflowers on mulch, paired with nasty grey shoes. I know she’s saying, ‘Take me as you see me, this is me, there is no other’. But, for the trial, I’d hoped for the alternate version of my mother, the one who sometimes opts for muted, the one who can tone it all down. We stand in the hallway of the courthouse, waiting to be called, and Jenny seems calm despite everything.

She stayed in my house last night and we drank whiskey: Auchentoshan, Kilbeggan, Talisker, Lagavulin and more, all the bottles lined up on my kitchen table. We didn’t talk about court or the teenage girl she ploughed down with her car – and crippled – while drunk. Jenny preferred, as always, to focus her mind elsewhere. Outwards, backwards.

‘All I ever wanted from him was a house with a garden,’ she said. My father had finally left her, alone in their flat, after this latest bout of chaos. ‘I wanted a garden rimmed with trees. Trees linked and dancing in an endless ring-a-rosy.’

I snorted. ‘You wanted trees like children but not actual children.’

‘Exactly,’ Jenny said, sipping from her glass and staring at me. ‘But you’re all right, aren’t you?’ She waved her hand at my kitchen, as if having a house meant my life must be good and sound and proper.

She read out the labels on the whiskey bottles. ‘Balvenie, Bunnahabhain, Glenkinchie.’ She drank. ‘Bunnahabhain: bottom of the river. That’s probably where I should be.’

‘Your old refrain,’ I said. As a child, when I irritated Jenny, she threatened to throw herself into the Liffey and float away. See how you’d like it then! ‘I lost weeks of sleep when you’d say that to me. I’d sicken myself imagining you stuck in riverweed, gone from me forever.’ My mother, a dark Ophelia, rotting in dank water.

She didn’t respond but her face shifted and she had the decency to look a small bit contrite. I poured her a glass of Bunnahabhain and together we let its nutty, oaky burn heat our throats and bellies.

‘Are the parents here?’ Jenny says, and her face is untamed, frightened. I’ve never seen fear on my mother before and it alters her.

I put my hand on her floral sleeve and feel the tremens there. I want to say, ‘It’s enough that you hate yourself,’ but I can’t.

She leans into me and I take her into the crook of my arm; she is small and ridiculous and sad in her Van Goghian dress. I look out the door of the courthouse, at the Liffey’s pea-soupy meander to the bay, and I hope that we will all be OK.

Nuala O’Connor lives in East Galway. Her fifth short story collection Joyride to Jupiter was published by New Island in June 2017. Nuala’s novel Miss Emily is about the poet Emily Dickinson and her Irish maid; it was shortlisted for the Eason Book Club Novel of the Year 2015 and longlisted for the 2017 International DUBLIN Literary Award. Nuala’s fourth novel, Becoming Belle, will be published in 2018 www.nualaoconnor.com. (This story originally appeared in NFFD anthology Sleep is a Beautiful Colour)