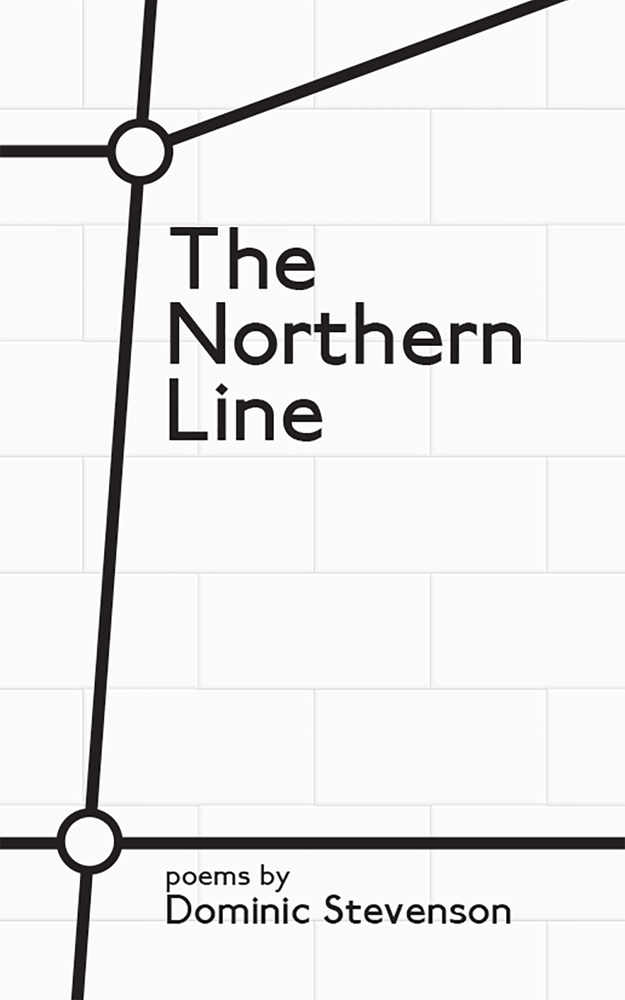 Dominic Stevenson’s debut poetry collection The Northern Line, is at times earnest and cajoling, caustic and indignant but running through it all is a vulnerability that makes it sing. You could read it in one sitting, as if you’re listening to a close friend in intimate conversation on a train journey home. If you’d like your faith restored in the role of poetry in the modern world, then this collection is a good place to start. I asked Dominic what led him to the title and concept of the book.

‘It’s called The Northern Line for a number of reasons. Firstly, I’m fascinated by the tube system. If I’m visiting a city I always make sure I go on the underground if there is one; I love their differences and uniqueness. I live near Highgate in London, and work near Waterloo, so I commute every day and a lot of the poems were written on the northern line. It seemed to fit with what I was trying to say. The poems within the book cover many aspects of my own life from love to travel to friendship. The blurb describes it as a rucksack of memories, and I stand by that. I always have a bag over my shoulder; it’s where I carry my life, and therefore my dreams, and I’ve spilled it into this.’

The Northern Line takes a hard look at poverty and injustice, but there is also humour and warmth; the collection brims with compassion and optimism. The language is open, democratic, punctuated at times by memorable imagery:

But if there’s one overriding theme, Dominic says, it’s love: ‘…love of a partner, of friends, of life, but mostly the love of people. I believe that poetry has a duty to say something, to put the spotlight on events and happenings where the subject may not have the power to shine the light on it themselves.’

The Northern Line is divided into four sections: welfare, love, travel and contemporary history. On social justice, Dominic’s voice is an antidote to apathy; he writes about the dispossessed and the dislocated, the vulnerable in the world, for whom he asks protection: “your words matter,” he writes in Word Watching. ‘I am no more deserving of affluence than anyone else, so where basic rights are denied I want to use my voice to speak out against that.’

‘our skins touching the edge

against the heads of tulips.’

(From We imagined flowers)

Dominic pinpoints the alterity and joy of the traveller in life, the strangeness of being alone, the distance from one another, and the treasure of intimacy in an indifferent world. The themes of the book unite in the final part of this collection, which ends with a reminder that it is folly to forget our history, that forgiveness is paramount, that we are all travellers, lovers, historians of our own experience:

The Northern Line, by Dominic Stevenson, Winter Goose Publishing, 2015. You can find out more about Dominic here and follow him on Twitter.

Ruth McKee is a copyeditor and writer, and creator of Spontaneity. Joint winner of The Irish Novel Fair 2015, she has short fiction in The Bohemyth, The Incubator and elsewhere. Shortlisted for The Francis MacManus short story prize, longlisted RTE/Penguin Short Story Competition. PhD Trinity College Dublin. Contact editor@spontaneity.org Follow her on Twitter.