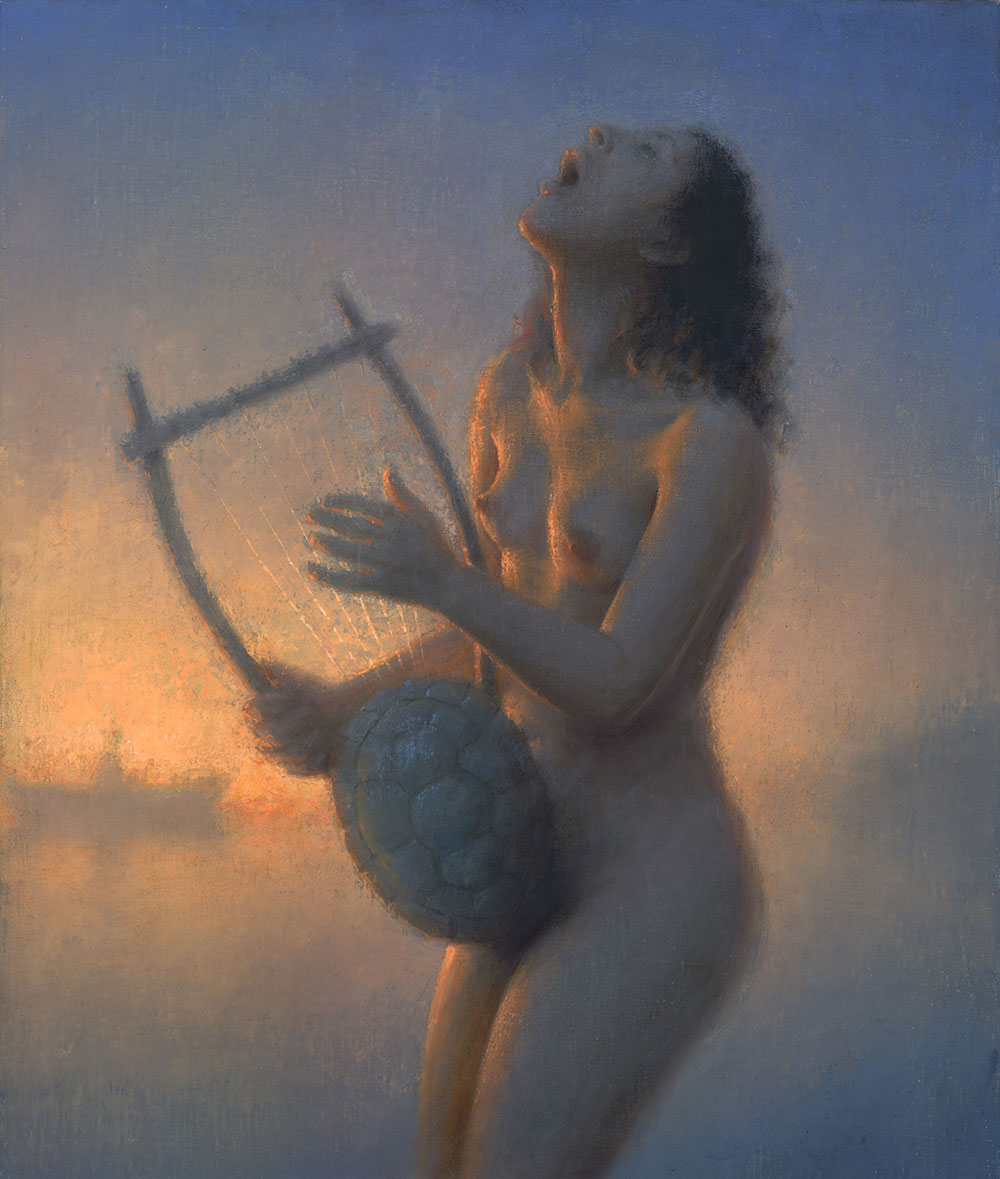 Siren by Conor Walton © 2014. Conor studied painting at the National College of Art and Design, graduating in 1993. After further studies in Britain and Italy, he returned to full-time painting in Ireland in 1996. Five successful solo-exhibitions followed with Jorgensen Fine Art in Dublin. Conor now exhibits widely outside of Ireland, with recent solo exhibitions in Britain, Denmark and Norway. You can find out more about him here and follow him on Facebook  or Twitter

Mia hears a voice, the same one that sung the night before and the one before that. The notes are whispers; declarations that she’s not quite sure are said at all. Tonight she will follow it, a decision made over dinner as she watched her parents bicker over what potatoes are best. Argue over everything but the real problem; they don’t know how to help their daughter and so pull at the threads that make up each other.

On hearing the hush, Mia slides from her bed and opens the window. The air is fridge cold. As she crawls out the wind plays with her, pinches and taps as if there’s a person inside. The soil is soft beneath her feet, bloated with the day’s rain. She squelches through the garden, dark with shadows, the hedges bent inwards in slumber. She pulls the gate slowly; draws out its giveaway squeak, so that if heard can be blamed on the gusty night.

Street lamps make moons of the road. The voice floats, ebbs in and out as if caught in a net. She is the only one around, alone in her pursuit and Mia wonders if it is all in her imagination. If the voice is a figment she has created to draw her away from a world that doesn’t seem to want her in it.

Whispers bring her past the corner shop that never has change, so you have to buy something else to make up the difference. Next door is the off-licence, with a window display of red wine bottles that dangle from strings in a ghoulish puppet show. A row of houses have dark windows and closed gates. A cat stretches on a wall, its eyes emerald in the dimness. Mia reaches out to rub its back, but gets a hiss for her affection. Tonight that cat is nobody’s pet.

Up ahead is the church, an orange box of bricks that has glass for walls and triangle points that are the ends of its roof. Mia has always thought it looks more spaceship than holy. Inside red lights sparkle, the remnants of people’s prayers contained in the small flame of an electric candle. The voice rises, a high pitch of a violin string plucked by a nail. She hears her name, marshmallow soft in the middle.

She looks to the sky and says: “Who are you?”

The wind swirls. Catches her name in its grasp and throws it out as rain. It brings her to the water, a small river that talks to the stones at its bottom. Mia walks along a path, vines and brambles bend inwards as she passes, thorns and tendrils tucked away. She comes to an opening, a small patch behind the church, toothy with tombstones. The stone is old, cracks and mould patches its lines and freckles. Nettles have taken over in sullen patches, tall as trees. The voice is silent; the only sound the river behind content with glugs.

A clang rings out, the bells from the church swung by a fierce pull. Mia covers her ears, their drums flush with noise-filled blood. The ground beneath shudders. Shoulders of dirt rise up and shrug into molehills. Nettles are thrown from the ground, their roots splayed as pale fingers. A headstone cracks in two. The bells stop, the ground steadies. Mia unclenches her ears and hears it, the voice in a low wail. From the crack in the headstone a mist rises in a billow of grey. A shape forms, small and beaked, its head of feathers a hood of black. Its eyes are bright pools of silver, unblinking.

Mia squirms under its stare, her mouth dry. “Why have you brought me here?”

The bird twists its head, leans it to the right so it appears dislocated. A woman’s voice pours from its beak in a molten metal wisp. “You are the one that has brought yourself here.”

Mia realises she had, each step here was hers, each turn made. Her bed now seems very far away. A pain roars through her side, the drugs her mother gave her that evening wearing off. The growths inside are spreading, hungry as caterpillars across a leaf.

“Your sickness has won,” coils across the sky in a mist.

Mia nods. She knows, even if everyone else tries to tell her otherwise.

The crow spreads its wings and bows: “Are you ready?”

She walks towards the grave. The nettles are gone, the earth fresh. Mia lies down and expects cold. Instead it is warm and soft, the trickle of the river and whistle of the wind a lullaby. She closes her eyes and feels a gust above, the crow’s wings flapping. Earth closes around her as she sinks, roots snake over her skin. The voice wails as Mia takes her last breath, the soil above smooth and solid as a lid.

The morning brings rain, a downpour that floods drains and clogs gutters. Mia’s mother gets the injection ready and goes into her daughter’s room. The curtains flap at the open window, the carpet soaked in an arch. She pulls it shut and gives out, asks what Mia was thinking letting the frozen air inside. To the silence she sits on the edge of the bed, lays her hand on a cheek taut as stone. She wrenches back the covers and sees the curl of her daughter, fingers wrapped around a feather, grey as ash.

Clodagh O'Brien writes flash fiction and short stories. Based in Dublin, she has been published in many interesting places. She likes to write in bed and realises there are too many books to read before she dies. She is Assistant Editor of short fiction at the online literary journal, The Bohemyth. You can find out more about Clodagh at www.clodaghobrien.com. She tweets @wordcurio.