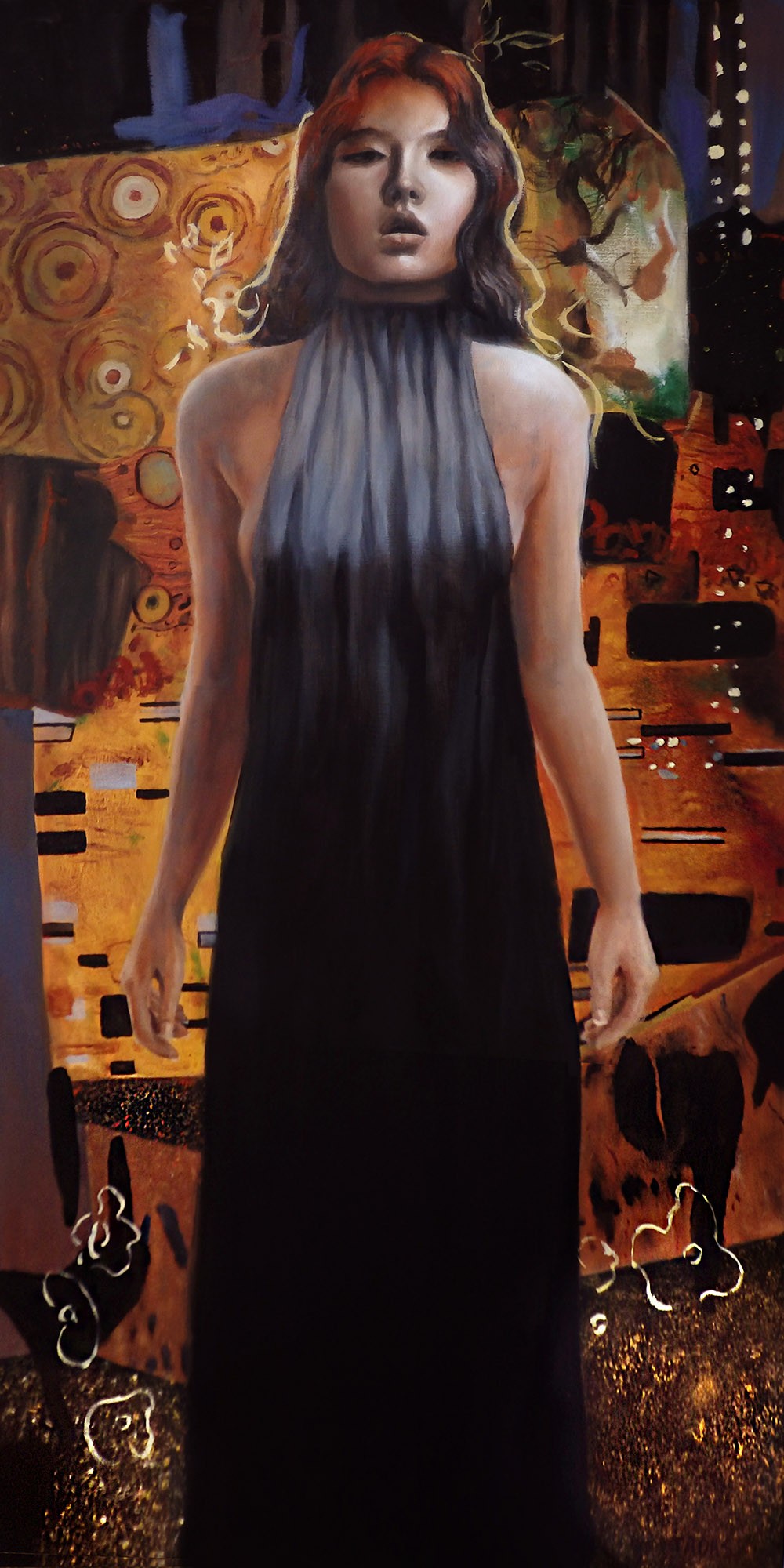 She knows that you know by Tada Sidlauskas © 2015. Tadas Sidlauskas is a 23 year old Lithuanian painter whose work consists of both realistic and abstract elements. He uses colour, ornamentation, abstract shapes, human figures and other elements to build an emotional connection with the viewer. He spends a lot of time traveling which greatly influences his work. You can follow him on Instagram, on Facebook and discover more on his website.

She watches their eyes, windows to the soul. Most look down, at their books, their phones, the floor. But occasionally someone looks up, reading the ads that line the tube carriages, or staring into space, and then she has them.

It’s like being dragged into a tornado, round and round, deeper and deeper, through pain and sorrow and rage and joy. Sometimes it’s easy to pinpoint the problem, so all-consuming there’s no room for any other thought. Other times, she has to rifle through dull, aching memories as if searching someone else’s suitcase. Once she’s found it, she can help.

“You are a good daughter,” she tells the woman who has finally had to put her father in a nursing home.

“She doesn’t deserve you,” she tells a young man whose wife has cheated on him again.

“Don’t let them use you,” she warns the young illegal immigrant, dead on his feet after a 14-hour shift in his uncle’s restaurant kitchen.

They regard her the same way – a quick glance of alarm and confusion. What’s she on about? What does she know? They look away, sometimes move away, disguising their actions as the volunteering of their seat to someone, or unexpectedly reaching their stop. Sometimes they get off the train, and then hop on again into the next carriage. They think she won’t realise, but she sees all down here in the depths. It’s fine, the seeds have been sown. They’ll think about it afterwards, as they’re walking to their jobs, or their homes, or the bar where they’re meeting friends. It will be a comfort to them, God willing.

Around she goes, hopping randomly from train to train, heading wherever she feels the pull. Until one day, she’s drawn to the Northern Line. She gets on at Euston, feeling the crush of bodies and minds.

“He didn’t suffer,” she tells an elderly Jamaican lady, pressed up against the door. The woman looks back, milky eyes pooling with tears. She shows no surprise, no fear. She just whispers, ‘thank you,’ before disembarking at King’s Cross.

“The next station is Angel,” a serene voice announces.

She steps off the train, goes with the flow towards the exit signs. The station name is everywhere on the curved walls, a red halo surrounding it.

Drifting on to the long escalator to the light, she ascends.

Anne O’Leary is a former journalist and theatre director living in Cork. She was longlisted for the RTE Guide/Penguin Ireland Short Story Competition 2015, and has had fiction published in the Sunday People newspaper. You can read more about her on her blog.