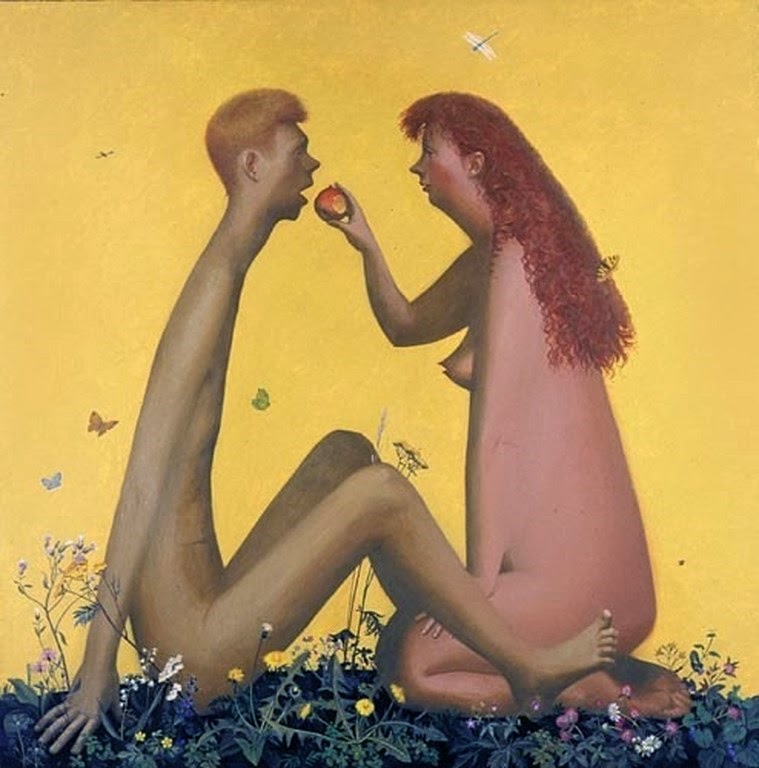 Paradise 1 by Ekaterina Yestebrova © 2014. Ekaterina's work is a mixture of the surreal and sublime, and is both playful and provocative. Since 1990 she has exhibited her work in her native Russia and internationally. Her paintings are in private collections in Russia, Germany, The U.S A, Italy, France, The Czech Republic and Switzerland. You can find out more about her, and view her work here

Until the lichen-jelly took them

I sat in them, daydreaming −

We’d set out sweet-potatoes in the spring.

The transplanter the Farmall Cub pulled.

He was a farmer, wore a turtle-shell.

I got sick on my wad.

Skeeter chewed his with décor.

That night in the barnyard I knew my story could not win over my swimmy-headedness.

Apple-bobbing?  Skeeter got more kisses and nose-rubs than apples he bit.

I still smell May’s neck, though I was too sick to know Satan’s apple cart upset my concerns.

I partook not of the apple cider fermenting in the Valley of Cow Mire,

Down where the clay streaked white and stripes clayey bright ranged the branch.

That’s where I walked to get my head right.

The moon was waning and the apples shrinking up.

Made the best cider; every farmer around Beaver Dam knew that.

I got to this day the big, old wooden keg we made ours in:  it’s got a bunghole.

Apple dumpling came with childhood, too.

Mama would cover the apples with pie-dough.

My father called Mama his “Dumpling.”

She made apple jack, too; I remember smelling the sliced apples cooking on the hot tin roof.

When I was coming along, trying to sing, I thought for sure God did make little green apples.

Roger Miller did not write the song; Bobby Russell did.

Russell Williams lived on “our place”; he kept his place.

My father loved his apple brandy.

You could taste the apples.

With a little water-sugar and some hot-roasted apples − what a “toddy for the body,” he’d say.

I have seen them breed in apples.

Have you ever seen Road-apples?  Called someone a Rotten Apple?

Apple Worm?  I knew a woman who kept a stall at the Farmer’s Market.

They turn golden, inscribed, with pan-drippings.

I believe there’s more good in One than bad.

Let me skip a line to highlight Memory.

First grade!  Her face grew on me like an orb

Moving my Adam’s Apple to some supposition.

Crab-apples we never cultivated, though some women in the country of my origins between

Made the best preserves you ever tasted out of the wild crab-apples.

If I could apple most things I would.

Time to type on my PC rather than an Apple.

Do you think there’s something to be said for eating an apple a day?